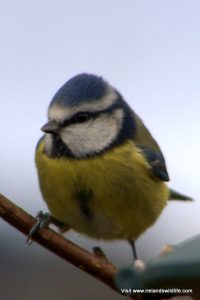 The blue tit is one of Ireland’s smallest and most attractive birds. Its distinctive cobalt crown, blue and yellow plumage, white cheek patches and black eye-stripe are unmistakable as it hops acrobatically from branch to branch in search of insect larvae, or hangs upside down at the garden peanut feeder.

Originally a woodland bird specialised to feed acrobatically at the very tips of branches in the tree canopy, they have adapted well to man-made habitats and regularly visit gardens, putting their woodland agility to good use claiming their share of the tasty rewards available at garden bird-feeders. A blue tit’s natural diet consists of a remarkable diversity of foodstuffs, including insect larvae, spiders, oak buds and moss spore cases. In the garden they will eat almost any scraps that are put out, and are the only tits that regularly eat bread.

Woodland blue tits regularly commute to nearby towns in times of food shortage or bad weather to take advantage of the plentiful supply of food at garden bird tables. More than 1,000 individuals may pass through a single garden in a year, even though it is unusual to see more than six or so at any one time.

Nesting takes place in April and May, when the female will lay a clutch of 7-12 eggs in a feather-lined nest of moss and grass built in a tree-hole or wall cavity. Blue tits readily use artificial nest-boxes, and are probably the most common occupiers of such boxes in Ireland. Both the timing of egg-laying and clutch size are thought to be related to the abundance of moth caterpillars in any given year, giving the tits the best possible chance of rearing a successful brood. The eggs are incubated for 12 to 16 days, during which time the male will feed the female on the nest. Once the chicks hatch both parents are kept busy providing a steady stream of food for hungry mouths.

The young birds fledge after about 15 to 23 days at which time they resemble smaller, paler versions of their parents with a distinct yellow cast to all of their plumage. Elsewhere in their range blue tits have been known to rear two broods in a single year, although this is very rare in Ireland.

Mortality among blue tits is high. From a family group of two adults and ten young in early summer only one adult and one young bird will typically survive to breed the following year.

Despite this high mortality the blue tit is abundant and widespread throughout Europe, only absent from northern Scandinavia. Populations are generally believed to be stable, with little recorded fluctuation in either distribution or density. There are an estimated 1,000,000 breeding pairs of blue tit in Ireland, with a further 3,300,000 pairs breeding in Britain.