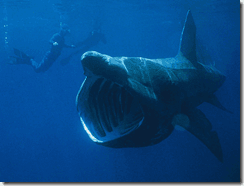 The basking shark is the biggest fish found in Irish waters, and the second largest fish on earth after its Indo-Pacific cousin, the whale shark. Although it belongs to the same family as the notorious great white, and has more teeth than any other shark, the basking shark is actually a gentle giant. It’s a filter feeder, and exists on tiny creatures that it sifts out of the plankton (a rich soup of tiny plants and animals that live in the surface layers of the ocean) through specially adapted gill slits.

Basking sharks can be found in temperate seas throughout the world with an average temperature range of 8º-14º C. They have been recorded in the Pacific, Indian and Atlantic oceans and can be seen off the Irish coast during the summer months. They are huge fish, with specimens reaching lengths of up to 12 metres (39 feet) and weighing up to 7 tonnes.

Basking sharks are grey-brown to charcoal-blue above with a pale belly. A distinctive bulbous snout combine with the massive gape, huge dorsal fin, large crescent-moon tail, long pectoral fins, and five huge gill slits each side of the head to make the basking shark unmistakeable.

Little is known about the natural ecology and behaviour of these extraordinary fish. Basking sharks get their common name from their feeding behaviour. They move through the water so slowly that they look like they’re basking on the surface. What they’re actually doing is filtering water… lots of it.

Basking sharks are passive feeders. They don’t actively hunt their prey, they simply swim through the water with their mouths open wide. Water enters through the open mouth and is expelled via the enlarged gill slits across a large number of structures called gill rakers, which act as an effective filter retaining the shark’s planktonic food.

A shark will typically swim with its mouth open for 30 to 60 seconds, then close its mouth to swallow the filtered plankton before starting the process over again. Estimates suggest a fairly large basking shark will filter around 1,500,000 litres of water per hour.

Although normally solitary, basking sharks are sometimes encountered in small groups, and very occasionally in larger aggregations of 100 individuals or more. They disappear from coastal waters over the winter. Exactly where they go is unclear, but they are thought to migrate offshore to deeper waters. They return to the coast in spring to feed and to find partners for mating.

Basking sharks are thought to reach sexual maturity at between 12 and 20 years of age. Baby sharks are live-bearing, with young developing from eggs inside the female’s body and hatching just before they are born. The gestation period of basking sharks is unknown, but is estimated at anywhere between 12 months and 3 years. Pups are 1.5 to 2 metres (5 to 6.5 feet) long at birth.

Because they grow slowly, mature late, and have a slow rate of reproduction basking sharks are very susceptible to human exploitation. In the past the species was heavily fished for the oil in their huge livers, and a booming basking shark fishery operated out of Achill Island in Co. Mayo. The last basking shark was landed commercially in Achill as recently as 1984.

Today the main threat to the species is the trade in shark’s fins fuelled by the increasing demand for shark fin soup in East Asia. The basking shark’s 2 metre (6.5 ft) dorsal fin has unfortunately become a valuable commercial prize.