You are here: Home / Featured / Fin whale stranding in Baltimore

A fin whale live stranded in Baltimore, West Cork this morning. The whale, an adult estimated to be between 45-50 foot long, was spotted in the harbour by locals early this morning.

It live stranded in shallow water between the pantoon and the pier. By mid morning the whale had attracted a sizeable crowd and the Irish Whale an Dolphin Group (IWDG), National Parks and Wildlife Service (NPWS) and Gardai were on the scene.

Padraig Whooley, sightings coordinator with the IWDG confirmed that the whale was a fin whale, the second largest animal on earth, and regular visitors to Irish waters. Experts on the scene quickly ruled out the possibility of re-floating the animal.

Death is almost always the only outcome when large cetaceans strand, and the prognosis for the Baltimore whale wasn’t good. Euthanasia was discussed as an option, but ruled out by local veterinary specialists due to the animal’s situation and sheer bulk. In the end the only thing to do was wait. 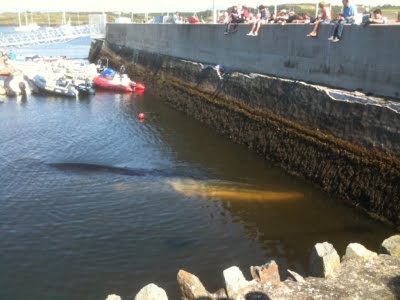 At 5 pm the huge animal was still breathing, but making no attempt to move out of its shallow birth. With the tide falling it is unlikely the whale will survive the night.

While an increase in live strandings like this one seems on the surface to be bad news, Mr Whooley points out that its important not to jump to hasty conclusions. Whales die regularly of natural causes, and a higher number of strandings, he suggests, may simply reflect an increase in whale numbers as north Atlantic populations slowly recover from decades of persecution.