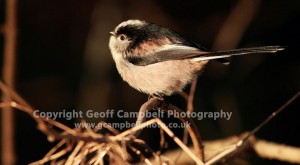 Few birds in Ireland are as endearing as the long tailed tit. The acrobatic antics of this small, fluffy bird with its extraordinarily long tail are a joy to behold as it flits from tree to tree. It occasionally frequents gardens, usually in small family groups, and sometimes visits peanut feeders and fat balls to supplement its diet, especially over the winter.

With its round body and incredibly long tail the long tailed tit is easy to identify. It’s a gregarious little bird, usually seen in small flocks of five to twenty-or-so birds, and you’re likely to hear their approach before you see them. The high ‘see see see’ calls, and a distinctive trilled ‘tsirrup’ as members of the group communicate with one another is very distinctive: once you’ve heard it you’ll always know when a flock of long-tailed tits is in the vicinity.

In general appearance this is a tiny black and white bird with delicate pink and dusky tones punctuating its plumage. It has a white head with prominent black eye stripes running back down the neck. The upper parts, wings and tail are predominantly black with flashes of pink showing, while the underside is a dusky-white, also tinged with pink.

These are incredibly acrobatic little birds, and use their long tails as a counter-balance as they hang every-which-way in an incessant quest for food. In flight they look for all the world like tiny white balls on sticks as they bounce energetically from tree to tree.

Long tailed tits favour deciduous woodland, hedgerows, parks and gardens, although they are also found on heath or scrub land where there are large shrubs and bushes to provide food and cover. They feed mainly on insects, spiders and grubs, but will also take small seeds in autumn and winter.

As with other small birds, long tailed tits can suffer high mortality in cold winters. Over the winter they often roost together to help retain heat, and it’s amazing how many manage to squeeze, tail and all, into a suitable tree crevice, nest box or roosting pouch.

Long tailed tits start breeding earlier in the year than other tit species. Construction of the elaborate dome-shaped nest can start as early as the end of February. The nest is an elastic structure of moss woven together with spiders webs and animal hair. The outside is usually camouflaged with lichen, while the inside lined with a layer of up to 2,000 feathers. Sited high in a tree or lower down in thorny scrub like hawthorn, gorse or bramble, this amazing structure can take the birds up to three weeks to build.

The female lays 8-12 small white eggs in the nest from March to April. Incubation takes 12-14 days and the young fledge 14-18 days later. A pair will rear one and occasionally two broods during a typical breeding season. Later in the season other long tailed tits may join a pair and help them to rear their young.

Once considered an infrequent garden visitor, garden bird surveys show that long tailed tits are becoming more common in our gardens so keep an eye and an ear out for this endearing little bird in a garden near you this winter….