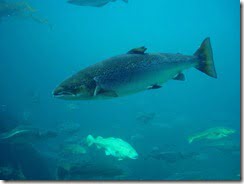 Watching Atlantic salmon leaping into and clearing a raging torrent of water as they travel upriver to spawn must be one of the most inspiring sights in nature. This magnificent fish has been recorded leaping more than 3 metres (10 feet) into the air to negotiate waterfalls, weirs and other obstacles.

Adult Atlantic salmon are large powerful fish that can weigh over 20kg (45 lbs). They have an elongated hydrodynamic body that deepens rearward from the small pointed head until it reaches its deepest point directly beneath the dorsal fin. The body then tapers back towards the tail. Adults are mostly silver in colour, lighter below than above, with a number of small black markings on the head, back and fins.

The adult salmon spends most of its life at sea, only returning to freshwater to breed. Its amazing life-cycle begins in midwinter high in our river systems, where adult salmon gather to spawn.

Female salmon scrape out a hollow called a “redd” in the gravel and in it lay about 2,500 eggs for every kilo of their body-weight. The waiting males compete to fertilise the eggs, which are then covered with gravel.

After about three months the eggs hatch into tiny orange alevins. These are unable to swim, and remain in the gravel living off an attached yolk sack until they grow to about 2cm (0.8 inch) long. During this time they absorb the yolk sack and become speckled brown salmon fry, finally leaving the safety of the gravel for life in the open water.

Most of these fry are eaten by other fish, insects and birds in their first few weeks of life. After several months those that survive will be 5-10cm (2-4 inches) long, and will have a series of dark markings down their flanks. They are now salmon parr, and will live in the river system for an average of two years before becoming silvery coloured smolts and running downriver to the ocean.

We know relatively little about the life of Atlantic salmon at sea. They are thought to roam widely feeding on squid, shrimp and small fish. They spend at least a year and usually more bulking up at sea before they become sexually mature and return to fresh water to spawn. Remarkably most adults will return to the exact river where they hatched, using their incredibly keen sense of smell and other sensory cues to lead them home.

Salmon cease to feed once they enter the river, and gradually deteriorate in condition as they make the arduous journey to their spawning grounds. At the end of their ordeal they are utterly spent, and most die on their way back to the sea. A few, however, will survive to spawn again in other years.

The Atlantic salmon has always had a special significance to the people of Ireland and has even earned a place in Irish mythology in the story of the Salmon of Knowledge. Many of Ireland’s rivers still harbour healthy salmon populations of, but today the species is under threat throughout its range.

For the last 200 years salmon populations have been declining steadily – a trend that has been linked to increasing industrialisation. In the past 30 years stocks have plummeted – with average catches today some 80% lower than in the 1970s. Commercial overexploitation and increasing river pollution are all taking their toll on this princely fish.

The Atlantic salmon has become a symbol both of nature’s bounty and of the quality of our environment. Let’s hope that the current crash in salmon populations can be reversed, and that the sight of the leaping salmon will continue to grace Irish rivers for many years into the future.