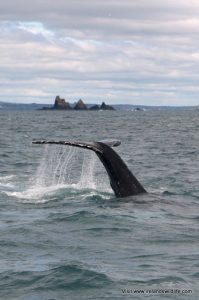 A new humpback whale for Ireland was spotted just off the coast of West Cork yesterday (Mon 18/03).

One of the most spectacular and enigmatic of the great whale species, humpback whales are infrequent but regular visitors to Ireland’s south coast. Traditionally humpback “season” in Ireland stretches from autumn through early winter, but this is the second year in succession that a humpback new to Irish waters has turned up off the West Cork coast in early spring.

Last April a new humpback for Irish waters (HBIRL#20) turned up with another known humpback (HBIRL#18).  At the time IWDG sightings coordinator Pádraig Whooley said it was very unusual for humpbacks to turn up in Irish inshore waters at this time of year.