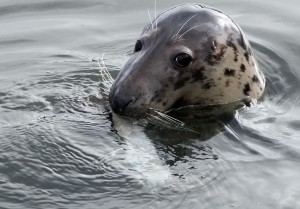 When it was made the world’s first officially protected species in 1914 the future looked bleak for the grey seal. The turnaround since then represents perhaps the most successful conservation story in history, and offers hope that efforts to save many of our endangered species may not be in vain.

Since their protection grey seal numbers have been rising steadily and the number of seals in the northeast Atlantic has more than doubled since 1960 to an estimated population size of some 89,000 animals today. That constitutes more than half of the global population of grey seals, and makes conservation of the seals around Britain and Ireland of international importance. In spite of their impressive recovery they remain the third rarest seal species in the world and the northeast Atlantic subpopulation was listed as “Endangered” on the 2000 IUCN Red List.

Grey seals belong to an order of marine mammals known as the pinnipedia – which literally means fin-footed. It is Ireland’s largest land-breeding mammal, with adult males (or bulls) reaching an average length of well over 2 metres (6.5 foot) and an average weight upwards of 230 kilos (507 lb) – dwarfing our largest land mammal, the red deer. Despite its name the grey seal shows a huge variation in coat colour from dark brown to grey or black with blotchy patterns. Females (or cows) tend to be lighter in colour than the larger, more heavyset males.

The most common view of a grey seal is that of a bobbing head as the seal rises out of the water for a look above the surface. At first glance seals adopting this behaviour look remarkably like people bobbing up and down in the water, a fact which undoubtedly contributed to legends of mermaids and mermen in years gone by. Grey seals have a large rounded head with no visible ears, an elongated snout and a heavy muzzle. The heavier build and longer snout help to distinguish them from the common seal, which is the only other pinniped found around the Irish coast.

Grey seals spend about two thirds of their time at sea, where they excel. Here their great bulk is no burden to them, and they use their finned feet to propel themselves through the water with remarkable agility for an animal of their size. They dive to depths of between thirty to seventy metres to hunt for food which includes many different fish species, crustaceans and cephalopods (octopus, cuttlefish and squid). The average length of these dives is around eight minutes, although grey seals are able to stay submerged for up to thirty minutes at a time.

In the autumn (September to November) females make their way to breeding colonies known as rookeries on remote rocky coastlines to give birth. At birth grey seal pups weigh 15 kilos (33 lb) and have a fluffy white fur coat. They grow quickly, putting on about 2 kilos (4.5 lb) per day thanks to the 60% fat content of their mothers super-rich milk. After suckling the young pup for about three weeks the female mates again before leaving the breeding colony. Gestation period is 11.5 months, which includes a 3 month delay in implantation of the fertilised egg.

First year mortality for young seals varies between 34-60% depending on location. Females reach sexual maturity between 4 and 7 years old while males reach sexual maturity at ages over 10. Grey seals typically live to between 20 and 30 years of age. The oldest recorded grey seal was a female that reached 46 years old. Killer whales and sharks are among their natural predators, but seal populations are under far greater threat through their interaction with man, particularly where commercial fishermen see seals as competition in pursuit of dwindling fish stocks.