You are here: Home / Featured / Living on the edge: “Model County” doing its bit for Irish biodiversity 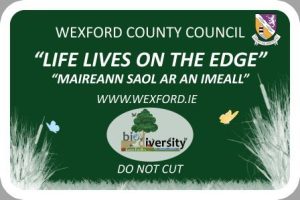 In general Ireland’s local authorities seem to see roadside verges and hedgerows as areas to be trimmed and tamed.

You see evidence of verge cutting and the decimation of hedgerows everywhere as you drive around the country. Neatly side-stepping the law in the name of health and safety, local authorities relentlessly slash hedges, ripping them apart with heavy machinery, they crop verges into oblivion, and legions of strimmer-wielding men in high-visibility vests make sure there’s not a wildflower in sight.

Overzealous neatness is the order of the day along many of Ireland’s highways and byways; neatness that sounds a death-knell for wildlife and biodiversity during the crucial breeding period from spring through the summer.

But it wasn’t always that way. Not so long  ago Irish roadside verges in summer were a riot of glorious colour, replete with wildflowers and humming with the buzz of pollinating insects. Native hedgerows dripped with blossom and wild fruits and birds, bees butterflies and mammals all thrived in these thin slivers of Irish wilderness.

Thankfully at least one local authority is taking a pro-active step to end this frustrating destruction of precious wildlife habitat. An enlightened new scheme from Wexford County Council called “Life Lives on the Edge” is looking to re-wild sections of the county’s roadside verges.

The overall aim of the project is to enhance or rediscover the range of visible biodiversity that potentially exists along our Wexford roads. The concept of this ambitious project originated from the Roads Strategic Policy Committee and has gained involvement and support from the Roads and Planning Departments of Wexford County Council.

The project focuses on managing roadside verges in a wildlife friendly way along four stretches of national road originally, boosting biodiversity without neglecting the authorities safety or infrastructural responsibilities. As part of the project the council trim the verges in February / March, then leave them alone until September. Between those times nature is left to her own devices, allowing wildflowers and associated fauna to thrive.

These pilot areas are situated on National Roads around Tagoat, Crossabeg, Scarawalsh and Barntown, and vary in length. Their boundaries will be defined by signposts (like the one above) at either end of the vegetated strips. If the pilot is successful the local authority hopes to roll the scheme out to wider areas of the county over the coming years.

If the scheme is successful let’s hope that the “Model County” can live up to its name, and serve as a model that other local authorities around the country will emulate, breathing life back into Ireland’s roadsides.