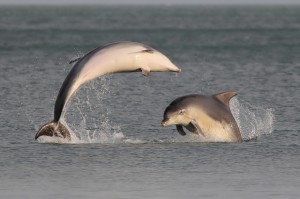 Of the 24 species of whales and dolphins found in Irish waters perhaps the best known is the familiar bottlenose dolphin made famous in the ‘60s television show, Flipper. Almost all of the dolphin stars of film and television over the years, and the captive performing dolphins in theme parks around the world, are bottlenose dolphins – a somewhat ironic testament to the species’ intelligence and mimicking ability.

The bottlenose dolphin is a large, robust dolphin with a characteristically short, stubby beak. It has a prominent sickle-shaped dorsal fin and a uniform grey colouration on its upper surface. The bottlenose is noticeably bigger than other dolphins commonly seen in Irish waters (with the notable exception of the killer whale) and lacks any distinctive markings on the back and sides.

Adult bottlenose dolphins vary greatly in size from just under 2 metres to just over 4 metres (6½ to 13 foot) long and can weigh anything from 150 to 650 kilos (330 to 1430 pounds). Some of the world’s largest bottlenose dolphins are found around Ireland and the UK. Differences in size are at least partly attributed to the temperature of the water the dolphins live in and the need for more blubber and bulk to combat the cold.

Bottlenose dolphins are active animals and are regularly seen bow-riding, surfing, tail-lobbing and breaching. They are capable of leaping several metres clear of the water… a trait exploited to the full in captive aquarium dolphins, but also occasionally observed in the wild. Dolphins are social animals, and tend to congregate in groups called schools that consist of anything from 3 to several hundred individuals. Within these groups they often associate with individuals of the same sex and of similar age.

Part of the success of this species is their catholic diet of fish, squid and crustaceans and their ability to adapt their feeding habits to suit their particular circumstances. When feeding on schooling fish such as mackerel – their favourite prey in Irish waters – they work together to herd and coral the fish into shallow water. While two dolphins stand sentry the others will take turns diving into the writhing ball of fish, picking them off at will. Other predators, like seals and gannets, have learnt to exploit the dolphins’ hunting strategy and often turn up at these feeding extravaganzas to grab a free meal.

Bottlenose dolphins are considered to be among the most intelligent animals on the planet, and their brains account for about 1% of their total body weight – compared to about 2% for humans. They live in a world dominated by sound, and are believed to use sound for much more than just echolocation. The vocal repertoire of bottlenose dolphins is thought to be extensive, and they communicate over considerable distances using an array of sounds largely outside the scope of human hearing. The Irish Whale and Dolphin Group (IWDG) are currently investigating the sonic repertoire of bottlenose dolphins in the Shannon estuary using a battery of hydrophones to “listen in” on dolphin communications.

The worldwide population-size of the bottlenose dolphin is unknown, and the species is listed as “Data Deficient” on the International Union for Conservation of Nature and Natural Resources (IUCN) Red List of threatened species. While they are thought to be relatively common worldwide there is no doubt that pollution and the degradation of fish stocks are having a marked detrimental impact on dolphin populations.