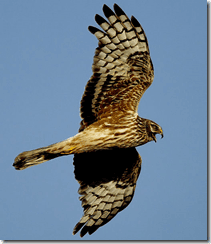 The languid flight of the hen harrier, gliding with wings held in its characteristic shallow V, has become a rare sight in Ireland. Historically one of our most persecuted birds of prey, the hen harrier’s habit of taking free-range domestic fowl (which led to the bird’s common name) did little to endear it to poultry keepers, and many were shot. Hen harriers also fell foul of the gamekeepers gun in areas where their upland breeding range overlapped with managed game-bird habitat.

In more recent times habitat degradation and falling prey populations have contributed to the hen harriers continuing decline. The species is now listed in the red category on the Birds of Irish Conservation Concern (BoICC) list, a document jointly compiled by Birdwatch Ireland and the Royal Society for the Protection of Birds Northern Ireland, and is in real danger of extinction here.

Hen harriers are slim, elegant raptors with a body length of some 43-52 cm (c. 17-20.5 inches), a wingspan of between 99-121 cm (c. 39-47.5 inches) and weigh around 0.3-0.53 kg (0.7-1.2 lb). The feathers of the face are arranged into two disks that channels sound waves backwards to the birds ear, allowing it to detect the movement of prey in the undergrowth. Adult male hen harriers are pale grey above with black tips and a smoky trailing edge to their long wings and a distinctive white rump. Females and immature birds are generally brown in colour, but share the male bird’s white rump and have a heavily barred tail – a characteristic that has earned them the nickname “ring-tails”. Male and female immature birds look similar, but when seen together they can be distinguished by size, as males are significantly smaller than females.

Hen harriers spend the breeding season in upland habitats, especially favouring heather moorland and areas of wild scrub. Immature forestry plantations also offer good breeding and hunting grounds for the birds, and at face value appear to be a good hen harrier habitat. However, unlike more consistent traditional habitats, forestry plantations mature, and as the canopy closes they become unsuitable for the harriers, forcing established breeding pairs to move on.

Harriers arrive at their upland breeding grounds from late march and stay until August or September. At the start of the breeding season the male hen harrier performs a breathtaking tumbling, somersaulting display that involved plummeting towards the ground then rearing up almost vertically before dropping suddenly again. This can happen several times in quick succession.

Nesting begins from about mid may. Hen harrier nests are shallow depression on the ground in low vegetation. The female lays 4-6 pale blue eggs from April to June and incubates them for about 30 days. Young harriers leave the nest after 29-38 days, but continue to be fed by their parents for several weeks while they perfect their own hunting skills. Hen harriers have one brood per year, although male birds may breed with and support more than one female.

Harriers feed on small birds and mammals, and occasionally reptiles, amphibians and large insects. They hunt by flying low over the ground, quartering their territory using their exceptional hearing and sight to detect any sign of prey. Once they spot a likely meal they swoop in for the kill.

In winter harriers can be seen hunting over a much wider variety of habitats, and frequent coastal marshes, farmland, fens and river valleys. Over the winter months they sometimes gather at communal roosting sites of 10-20 birds, and sometimes many more. A study by Duchas in 2000 estimated that there were just over 100 breeding pairs of hen harrier in Ireland.