You are here: Home / Featured / Shocking “live bait” poisoning of buzzards in Rosscrea 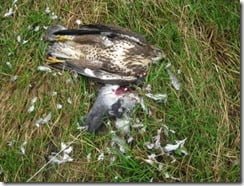 The appalling practice of poisoning birds of prey in rural Ireland continues, and took an even more sinister twist recently according to last week’s Birdwatch Ireland eWings newsletter.

The pigeons, which had been tethered and had their wings clipped to prevent escape,  were tied down in close proximity to a buzzards nest. They were completely covered in illegal carbofuran poison.  Beside the partially consumed carcass of one of the pigeons the volunteers found two of the three Buzzard chicks from the nest. The birds had died instantly after feeding on one of poisoned pigeon.

“We couldn’t believe someone had poisoned the chicks,” said one of the volunteers. “We had been watching them all summer and it was sickening to see them killed like that for no reason.”

The land owner, who had been cooperating with the Birdwatch Ireland volunteers to monitor the young buzzards, was equally outraged by the incident.

“I had absolutely no problem with these birds.  They have been around for at least the last three years and have done nobody any harm, and they have not caused me or any of the other farmers in the area any problems whatsoever. I gave nobody permission to come on my land and lay down poison, and whoever did so was trespassing,” he said.

The poisoning was reported to the National Parks and Wildlife Service and the Gardai who visited the scene to collect evidence. An investigation into the crime is on going.

Unbelievably when the volunteers returned to the scene the following day to check on the surviving buzzard chick they discovered more live pigeons tethered in the same place, and although the remaining chick was alive, they found the remains of another raptor – this time a sparrowhawk, lying next to one of the partially consumed pigeons.

“This was a very deliberate targeting of a locally well-known Buzzard nest and a particularly cruel way of using hand-reared pigeons as live bait in order to poison the birds,” commented Alan Lauder, Birdwatch Ireland’s CEO. “Apart from being illegal, the laying of poison in the countryside to target any type of wildlife should no longer be tolerated in Ireland today.

As well as the danger to wildlife, Carbofuran is a particularly dangerous poison and could have caused serious harm to anything or anybody else who came into contact with it. According to the Birdwatch Ireland report if local children come across the pigeons, and had tried to rescue them, the poison could well have proved fatal.

“This is incredibly frustrating and disheartening.  We have witnessed many poisonings of birds of prey, but this incident is particularly gruesome and was obviously meticulously planned to do as much damage to the nesting Buzzards as possible,” said John Lusby, Birdwatch Ireland’s Raptor officer.  “Carbofuran is a lethal substance, and in addition to the intended targets, the Buzzards, it would have also killed anything else that came into contact with it, including pets and even children.”

Buzzards in Ireland feed mainly on rabbits and rats, helping to keep the numbers of these species (which landowners often regard as pests) under control.

If you encounter a dead bird of prey, or another species which you suspect may have been poisoned, do not disturb the scene and please report the incident immediately to the National Parks and Wildlife Service (see the State Directory section in the phonebook) or BirdWatch Ireland on 01 2819878.