You are here: Home / Featured / A natural remedy for a hectic lifestyle 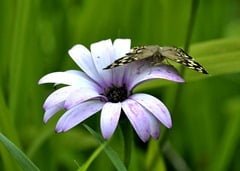 Life these days is a bit of a dizzy whirlwind. With work pressures, children, ever-present household chores and sundry other demands on our finite sliver of attention, it can be hard to find time for nature.

But I find taking even a little “time out” to connect with the natural world around me, even if its just outside my back door, helps put the world in perspective, improves my general frame of mind, increases mental awareness, boosts energy levels and somehow makes the trials of the day seem more manageable.

This morning, for example, I got up twenty minutes before I needed to. After a quick shower and a strong coffee to cut through the early-morning cognitive fog I was standing at the back door watching fledgling wrens jostle for position as their parents ferried food back and forth. On the windowsill next to me an ermine moth that had been manically head-butting the window the night before rested in quiet repose, a sharp contrast to its frantic, light-induced madness.

It was a damp, overcast morning, but relatively warm. The muted colours weren’t drab so much as soft… merging imperceptibly to present a scene subtly but noticeably different to the blazing hues and sharp relief imparted by direct sunlight. It was familiar, yet unique… always similar, never quite the same.

A quick spin around the house revealed spotted flycatchers busy hunting from the vantage point of the nearby ash trees; swallows and house martins patrolled the local air space, picking off early morning insects; a caterpillar-laden blue tit landed on some nearby cables briefly before heading off, presumably to feed a brood of hungry youngsters; a host of starlings quarrelled noisily in the hawthorn tree, joined by the incessant chatter of great tits.

Making my way around the front of the house I was greeted by a variety of gulls and crows patrolling the field opposite, scouting for worms and other invertebrates attracted to the surface by the overnight rain. Birds are bound to feature prominently in any hasty nature-watch. They’re much more obvious and visible than most other wildlife. But it wasn’t all birds. On a grassy, gorse-covered bank in the middle distance I could make out rabbits frolicking, their flashing white bobtails like miniature beacons. An Irish hare lolloped comically through the long grass of a nearby pasture, oblivious to the danger of a fox working its way diligently along the hedgerow a few fields over. In the ditch across the road an assortment of wildflowers nodded their heads in the gentle breeze, a few early-morning bumblebees and a variety of other insects were already hard at work gathering nectar.

Within ten minutes I was back in the house after my pre-breakfast safari, wide awake, energised and ready for whatever the day might throw my way.

It’s not just me — over recent years study after scientific study have reinforced what we instinctively know to be true: getting close to nature is good for you. Spending time outdoors in a natural setting helps to reduce stress, improves mood, reduces anger and increases our overall sense of happiness and wellbeing. You don’t have to allocate a big chunk of your precious time to experience the benefits either — a study published in Environmental Science and Technology found that the biggest vitality boost occurs in the first five minutes. Another study in the Journal of Environmental Psychology confirmed that being outside “in nature” for just 20 minutes on any given day is enough to significantly boost your vitality levels.

“Nature is fuel for the soul,” said Richard Ryan, lead author of the second study. “Often when we feel depleted we reach for a cup of coffee, but research suggests a better way to get energized is to connect with nature.” I tend to agree with Richard — but personally I’d order the coffee to-go and get the best of both worlds.

You don’t really need science to confirm all of this though — you can test it for yourself. Just spend one lunchtime cooped up in your busy office or stuck in the house, then the next day take a half-hour stroll around a nearby park, woodland or garden. Now ask yourself which one feels better for you?

Engaging with nature is free, it doesn’t take much time and it does us all sorts of good. Sounds like what the Americans would call “a no brainer”.