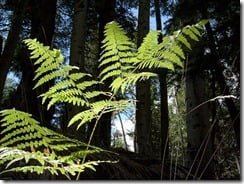 Most of us are familiar with the long, branching fronds of bracken. This common deciduous fern is found all over Ireland and grows in all sorts of habitats. It is a large fern: fronds often grow to 2 metres (6½ feet) or more and have been known to reach 3 metres (10 feet) in favourable conditions.

The species’ scientific name (Pteridium aquilinum) comes from the Greek word Pteris, which means fern, and the Latin aquilinum, which means eagle-like. Bracken is an old-English word that originally applied to all large ferns, but eventually came to represent this species in particular. It has a variety of other common names, including brake-fern, eagle-fern and fiddlehead – a reference to the curled young fronds that have been likened to both the head of a fiddle and a shepherds crook. Young shoots and leaves are covered in a downy, silvery hair and brown scales that gradually fall away as the young frond unfurls.

The fronds are made up of a number of lance-shaped leaflets or pinnae that grow out of the central leaf-stem. Each leaflet is further divided into smaller sub-leaflets or pinnules. Fertile fronds bear brown spore-filled fruiting bodies called sori on the underside of these pinnules.

Bracken fronds die off after the first frost of winter, rapidly turning brown and falling to the ground. New fronds emerge again the following spring when all danger of frost has passed.

The visible fronds are attached to a thick root-like underground stem called a rhizome. Rhizomes can be up to 2cm (1 inch) thick and extend up to 6 metres (20 feet). They generally consist of an elongated main stem that acts primarily a carbohydrate and water store, off which a series of sub branches extend closer to the surface and support the fronds. On the underside of the rhizome thin, brittle black roots extend into the soil to extract water and nutrients.

Bracken is a well adapted pioneer species that colonises quickly by means of its wind-borne spores. Once established it expands rapidly via a creeping underground network of rhizomes. This can result in large colonies of bracken that completely dominate the immediate landscape. It is a domination assisted by an impressive array of complex chemical compounds that allow bracken to inhibit the growth of competing plants, discourage grazing animals and disrupt the growth patterns of insect pests.

People have used bracken throughout recorded history. The fronds have been used as packaging material, animal bedding, roofing thatch, green manure and fuel. In the Middle Ages bracken was considered so valuable that is was sometimes used to pay rents. Ash from bracken fronds was used as a source of potash in the soap and glass industries until the 1860’s and the rhizomes were used in tanning leather and to dye wool yellow.

Bracken was also a source of food: the newly emerging fiddleheads were picked and consumed fresh or preserved by salting, pickling or sun-drying. Both rhizomes and fronds have been used in brewing beer, rhizome starch has been used as a replacement for arrowroot and dried, powdered rhizome has been used to make bread. In some places, most notably Japan, bracken is still used as a source of food.

However, the wisdom of eating bracken has to be called into question as every part of the plant is toxic. It is poisonous to livestock, and if eaten in sufficient quantity can prove fatal. Eating bracken has been associated with increased instances of stomach cancer in humans, and the plant has been implicated in certain types of leukaemia, bladder cancer and cancer of the oesophagus.