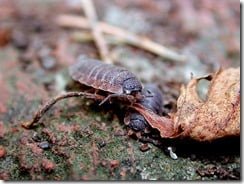 Woodlice are fascinating, often much maligned little creatures that are found all over Ireland. Turn over a rotting log or large stone in the garden and you’ll probably find a teeming mass of woodlice underneath, attracted by the moist conditions that they need to survive.

There are some 3,500 species of woodlice in the world, with 32 recorded here in Ireland. The more common of these species, like the common rough woodlouse (Porcellio scaber – see photo), the common shiny woodlouse (Oniscus asellus) and the pill bug (Armadillidium vulgare) are abundant around our houses and gardens. These amazing animals are actually crustaceans, more closely related to crabs and lobsters than to their garden neighbours. They belong to a group called isopods (from the Greek words isos, meaning equal, and podes, meaning feet). Most isopods are marine with some occurring in fresh water and a few, like the woodlice, confined to dry land.

Woodlice have a hard exterior skeleton, like insects and spiders, but in woodlice this lets water vapour through – which makes them particularly vulnerable to drying out. Because of this they tend to avoid bright, dry conditions and congregate during the day in moist, dark places like compost heaps, under logs and stones or in cracks and crevices where the danger of drying out is minimal.

Woodlice eat dead or decaying plant matter and are an essential component of nature’s waste disposal system. The ultimate recyclers, they help to break down the complex structure of the material so that vital nutrients are returned to the soil.

Unfortunately for them, their tendency to congregate in dark, damp places, and their attraction to waste vegetable matter, sometimes draws woodlice into houses. They are often labelled as pests, when in truth they do far more good than harm. Addressing problems like damp and ensuring that no vegetable or plant waste accumulates in the home will help keep woodlice away.

Underneath their protective plates woodlice have seven pairs of jointed legs, and in females a brood pouch towards the rear of the body. Most species in Ireland have one brood of babies per year. The number of eggs produced varies according to the size of the female, but upwards of 200 eggs is not uncommon in a brood. Fertilised eggs are transferred to the brood pouch where they hatch in three to nine weeks. Baby woodlice are particularly vulnerable to drying out at this stage and remain in the mother’s protective pouch until after their first moult, when they venture forth on their own.

Because of their hard external skeleton woodlice must moult in order to grow. This moulting happens in two stages, with the back half of the exoskeleton being shed first, followed by the front half a few days later. This two-stage moult is thought to help woodlice to stay active and avoid predators at this vulnerable time, and assists with water conservation.

Small mammals and birds are the main predators of woodlice and can consume hundreds in a day if they can find them. While many spiders find woodlice unpalatable, several will eat them, and some spiders specialise in them, eating almost nothing else.

In the past having woodlice in your house used to be considered unlucky, and any food they walked over was said to be poisoned. Eaten alive, they were said to provide a cure for stomach upsets and diseases of the liver. Like most crustaceans woodlice are quite edible, and are advocated by many "survival enthusiasts” as an alternative food. Some even suggest that for seafood sauce the flavour of woodlice is superior to that of prawns… but I think I’ll take their word for that!