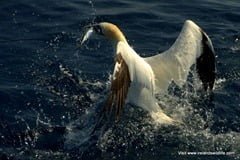 It was one of those calm spring days where you feel anything is possible. The Atlantic, while not quite flat, had only the tiniest of swells. Gazing out over a vast expanse of blue, a distant haze towards the horizon was the only impediment to otherwise perfect visibility. You got the sense that at any moment the peace could be shattered by… well… anything.

Sitting on a headland looking out over the sea might not sound that thrilling a pastime on the face of it. After all a view, however arresting, can only command your attention for a limited time. But it all depends on your perspective. What adds interest, for me at least, is all the stuff you can’t see. Looking out, scouring the horizon from east to west and back again, I always get the feeling that something… anything… could appear at any time.

Anticipation and potential… the drugs of choice for the wildlife junkie.

The hit: the rush of adrenalin that kicks in when you see what you’re looking for is the “high”, but that endorphin fuelled, pulse quickening giddiness is all too fleeting. It’s the anticipation — the certain knowledge that every movement, every scan of the binoculars, could reveal something amazing — that’s always there. It’s the slow burn that fuels the obsession, and it means you never really switch off. You’re always looking!

With wildlife you get no guarantees… it’s an insanely unpredictable pastime. No two visits to a location are ever the same. What you’re likely to encounter will depend on the season, the weather, the time of day, the temperature and a host of other variables outside your control. We use neat words like biodiversity to encapsulate the variety of species found in a particular area — but biodiversity isn’t a static concept: it’s in a constant state of flux. The selection of plants, animals, birds and fungi you could see changes all the time. You never know for sure what you might find, and that not-knowing is a huge part of wildlife’s appeal. 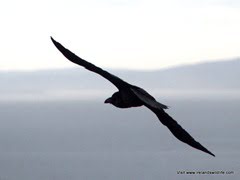 Today we were looking for cetaceans. My companion was on official business, conducting survey work for the Irish Whale and Dolphin Group. I’d tagged along on the off chance of seeing something… anything. 24 species of whales, dolphins and porpoise have been recorded in Irish waters… about seven or eight of which could reasonably turn up off a south-west headland at this time of year. This particular day though the only one to make an appearance was the smallest of them, the harbour porpoise.

I watched the small group of porpoises for a while, moving back and forth less than a kilometre from the shore, hoping they might be a precursor to more widespread cetacean activity. Then I noticed a bird, much closer in than the porpoise. I could see it was a diver, but it was far too svelte looking for the chunky great northern divers that often loiter just offshore. Red-throated diver perhaps? But no… the pattern of the plumage around the head and throat wasn’t right. I checked the flanks and there was the tell-tale white patch showing above the waterline. It was a black-throated diver — a scarce visitor to these shores, and an excellent find.

While it’s always great to see something a bit rare… simply because you don’t get the chance that often, wildlife watching is not all about scarcity. Common species always have the capacity to delight and surprise. Fulmars flew around us, stiff-winged masters of the turbulent air currents around the the cliff face. Like miniature albatrosses they wheeled and dove, a wonder to behold for all of their familiarity. A little further out gannets began to congregate, folding their wings to plummet spectacularly into the water, re-emerging some seconds later with a silvery prize.

A deep “cronk, cronk, cronk” made us look up as a raven cruised by a scant six feet above our heads. You don’t really appreciate how big ravens are until you see one up close. Our largest crow species, ravens are impressive looking birds. The audible “swoosh” of its broad wings, the heavy set frame, jet black plumage and massive bill all contributed to a sense of poise, confidence and power. A few seconds later and the bird was gone, but the sense of wonder lingered.

I left that day elated by what I had seen, and aware that the whole experience had been heightened by what I hadn’t seen… or rather by the anticipation of what I might have seen. There’s always next time.