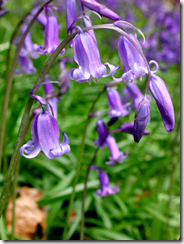 There’s nothing quite like walking into an Irish woodland in spring and being greeted by a vibrant carpet of flowering bluebells. One of Ireland’s most familiar and striking wild flowers, bluebells are found all over the country. A display of the flowers en-masse is breath-taking: a true wild phenomenon.

The Bluebell is a wild member of the hyacinth family, and although common and widespread in Ireland and Britain it is a globally threatened species, making the Irish population particularly significant internationally.

The fragrant, bell shaped flowers that give the plant its name stand upright when in bud, but hang downwards when fully opened to nod gently in the spring breeze. Flower colour ranges from the familiar violet-blue to white, and even pink on rare occasions. The flowers are arranged in clusters on flower spikes (called racemas) that grow to about 40cm (c. 15.5 inches) high and have drooping tips. The narrow, deep green leaves reach a length of about 45cm (c. 17.5 inches).

Bluebells flower from early April to June, making the most of the fact that the trees above have yet to develop their full complement of leaves. Plenty of light still reaches the forest floor, and the bluebells are quick to exploit it. The flowers attract a host of insect pollinators, which makes them particularly valuable to a wide range of wildlife. 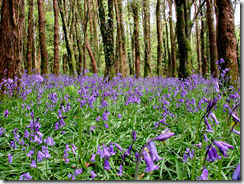 Bluebells are perennial flowers that grow from underground bulbs and are found in the same location year after year. This predictable pattern of growth has led to woodlands around the country becoming locally noted for their fine spring display of bluebells.

Although bluebells favour native broadleaved woodland, and put on their best flowering displays in such forests, they also grow in other habitats. It’s not unusual to find swathes of bluebells adorning meadows and cliff-tops, and growing under hedgerows or beneath upland stands of bracken – perhaps a sign that these areas were once covered by native woodland.

Once bluebells finish flowering the flower spikes die back, but the foliage persists for some time. The leaves convert energy from the limited amount of sunlight that still penetrates the now fully developed woodland canopy. This energy is converted into food and transported to the bulb where it’s stored to fuel next spring’s early growth. Eventually the leaves too die back.

The second part of the bluebell’s scientific name Hyacinthoides non-scripta, means “not written on”, a label to distinguish it from the purple hyacinth described in Greek mythology. Legend has it that the youth Hyacinthus, favoured by the sun god, Apollo, was killed by Zepherus, god of the west wind. In his grief, Apollo raised a purple flower from Hyacinthus’s blood, and traced the letters “Ai, Ai” upon its petals so his cries of woe would endure on earth. The bluebell bears no such inscriptions, hence its suffix nonscripta.

Ironically the bluebell’s popularity is the source of one of its biggest threats. Bluebells hybridise readily with the Spanish bluebell (Hyacinthoides hispanica), a species introduced to the horticultural market. In Britain there is growing concern that hybridisation could threaten the genetic integrity of wild bluebells, and the same could happen here in Ireland.

Another major threat is habitat destruction, and loss of hedgerows, scrub and woodland often leads to decimation of local bluebell population. Bluebells have also been listed as a species that could be particularly susceptible to the effects of global warming and climate change.