In this guest post, contributor Charlotte Klassa takes a closer look at many people’s favourite Irish seabird, the colourful and charismatic Puffin. 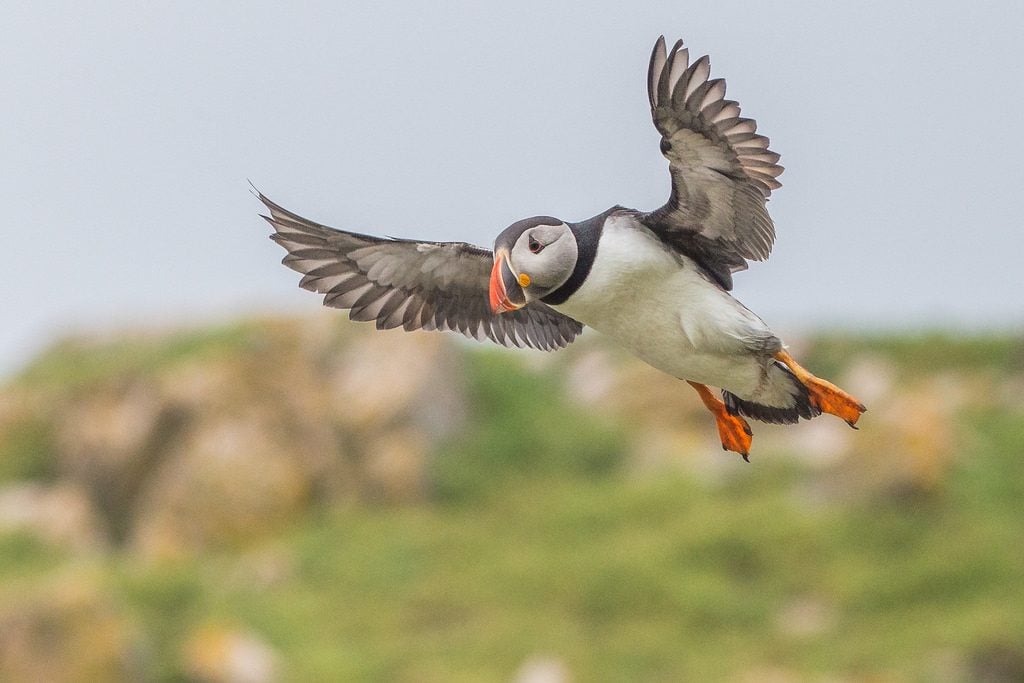 The Atlantic Puffin is a strange bird. It looks like a penguin and a toucan rolled into one. This is the tell-tale sign of the auk family of birds: that butler-like dignity and tail-coat. People can concentrate on this plump little bird’s adorable and exotic features so much that they forget to remember that it is actually a hardened seafarer, made to thrive in the most extreme conditions.

Atlantic Puffins are built for survival – with a wingspan up to 63 cm, and 20 cm in height, their orange webbed feet end with sharp claws. During the breeding season, their characteristic beak becomes very broad, with orange and yellow stripes and ridges. While the females are slightly smaller than the males, both sexes have the same plumage.

Atlantic Puffins live in the open ocean for most of the year, feeding on fatty fish like herring, hake and capelin. Their diet largely depends on their location: Puffins that flock around Ireland and Britain feed mostly on sandeel and sprat. They come ashore to colonise rocky outposts and small islands from April to August – this is the time to go and drive the coast in hopes of catching a glimpse of one.

In Ireland, Atlantic Puffins come to reside mainly on the west coast, and a few locations along the east coast. They prefer the safety of cliffs and sea-stacks, away from predatory animals like foxes or rats. They have been known to use rabbit holes for nesting, sometimes even evicting the original tenants.

A very important location to note here are the Skellig Islands. They are the perfect nesting ground – two steep and very rocky islands, located 13 km west of Bolus Head in County Kerry. The larger of the two, Skellig Michael, happens to be UNESCO World Heritage Site. It is a home to not only Puffins, but the ruins of an early Christian monastery. Because of this, it is open to the public and if you are lucky enough, you can take a tour to Skellig Michael. The smaller island is closed to visitors. These tiny, rocky islands are home to multitudes of different sea birds and make up some of the most important sea bird nesting habitat in Ireland.

One of the most recent controversies involving Skellig Michael was none other than the filming of Star Wars. Birdwatch Ireland was very critical of filming crews intruding on this site with their helicopters and drones. There were Puffins everywhere, as this was done during the nesting season. The film crews could not shoot around the birds, and they had to be edited out and digitally altered to fit in with the Star Wars universe: the Puffin became a Porg.

Puffins can live to be 30 years old. They enter breeding age when they’re 5, and they are known to take breaks that can last up to two years. The reason for the break in breeding is thought to be stress – Puffins simply need to give themselves a break from parenting.

It is also because of stress that the global Puffin population is in decline. Studies show that after long transatlantic journeys, Irish Puffins are simply too tired to breed. This, along with other factors, has worried conservationists and in 2015 the International Union for Conservation of Nature upgraded the Puffin’s status from “Least Concern” to “Vulnerable”. Some of the population decline may be due to predators such as rats, and increased predatory behavior from gulls.

Another key contributor to population decline is related to climate change, and the resulting shift in food availability. Changes in water temperature, and other climate-related environmental factors affect the population of certain fish species that are a staple of the Puffin’s diet.. With less food available, chick mortality rates increase. We may very possibly see the populations declining further in the future.

While Atlantic Puffin breeding colonies are mostly in Iceland (60% of the world’s population) Newfoundland and Labrador, Norway and Greenland – their Irish colonies are located in some of the most scenic places in the world, and are well worth visiting.

Charlotte Klassa is a freelance writer, mother of two with a background in the travel and culinary industry. She is an amateur birdwatcher, and loves to educate others about the flora and fauna on the Emerald Isle. She occasionally guides tours with Go Irish Tours, where she shares her love of Ireland with visiting overseas tourists, and curious locals.