The common dolphin is regularly encountered around the Irish coast. As its name suggests this is one of the most abundant and widely distributed dolphin species in the world, and occurs in all tropical, sub-tropical and temperate waters with average surface temperatures above 10°C. They are often seen in large schools that can consist of hundreds, 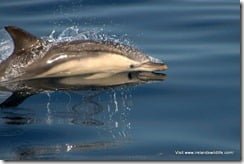 even thousands of individuals.

Common dolphins grow to between 1.7 and 2.6 metres (5.5 to 8.5ft) long and weigh from 70 to 110 kg (155 to 245lb). They have the classic streamlined dolphin shape and conspicuous markings on the flanks that make the species relatively easy to identify in the field. The key feature to look for is the distinctive hourglass pattern formed by an ochre patch on each flank in front of the dorsal fin and the light grey of the rear flank and tail stock. The dolphin’s beak, back, fins and tail flukes are dark, ranging from black through dark grey to brown, and forming a prominent V-shaped saddle directly beneath the dorsal fin where the two halves of the “hourglass” intersect. 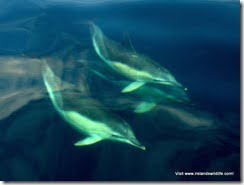 Common dolphins have a maximum life expectancy of between 25 and 30 years, with females reaching sexual maturity between 6 to 7 years of age and males from 5 to 12 years. Calves are born after a gestation period of 10 to 11 months and are about 80 cm (2.6ft) long at birth. They are typically nursed by their mother for 14 to 19 months, although this can vary from population to population. 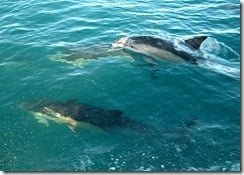 Undoubtedly among the most active and boisterous of dolphin species, common dolphins are fast swimming and often leap acrobatically out of the water. They are also highly vocal and produce a wide range of squeaks, whistles and pulsed sounds, some of them even audible above the surface. Bow-riding in front of fast moving boats is known to be a favoured activity of the common dolphin, and they even make a bee-line for boats to take advantage of this “free” propulsion. It is a spectacular sight to see large numbers of common dolphins leaping in front of and around a boat, seemingly taking turns at riding the bow-wave. They are known to ride the bow-waves created by large whales in much the same way.

Although by far the greatest concentration of common dolphins in Ireland is found in deeper waters over the continental shelf and further offshore, there is significant common dolphin activity in shallower coastal waters around Ireland – particularly during the winter months when large numbers of dolphins follow migratory prey species inshore.

Common dolphins feed on a wide variety of squids and fishes, particularly shoaling fish like herring and sardines. They adopt a variety of cooperative feeding strategies to improve their hunting efficiency, including driving their prey so that it is concentrated at the surface – a practice that often attracts a lot of seabird activity in areas where the dolphins are feeding.

Although widespread and generally abundant worldwide exact population numbers for the species are unknown. While certainly not scarce there is evidence that certain populations are in decline, succumbing to the same threats that affect so many cetacean species: issues like entanglement in fishing gear, chemical and noise pollution, human disturbance, hunting, habitat loss, and of course the depletion of prey species by over fishing are all taking their toll.