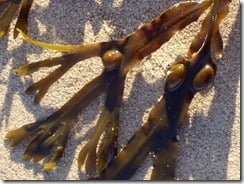 Bladder wrack, also known as Black Tang, Rockweed, Bladder Fucus, Seawrack, Sea Oak, Black Tany, Cut Weed, and Rockwrack, is a common seaweed species found on the middle-shore of rocky coastal areas. It can occur in high densities where conditions are suitable, forming a dense, multi-layered carpet of fronds over the rock surface.

Bladder wrack gets its name from the air bladders that typically occur in pairs along its fronds. These air bladders serve to float the frond when it is immersed by the tide, exposing a greater surface area to sunlight for photosynthesis. Although it belongs to a group known as brown seaweeds (the kelps and wracks), bladder wrack actually varies in colour from olive green to dark brown, sometimes appearing almost black. As with other wracks, it attaches itself to the rock by means of a root-like holdfast, but unlike the roots of a terrestrial plant this holdfast acts merely as an anchor, and plays no role in absorbing water or nutrients. These the seaweed obtains directly from seawater via its fronds.

Bladder wrack typically lives for 2 to 5 years and can grow to be quite a large plant, with fronds reaching up to 2 metres (6½ foot) in length. Its appearance varies according to prevailing environmental conditions, and in particularly exposed areas, where significant wave action causes high levels of water movement, the characteristic air bladders are much reduced or even absent. The bladders tend to increase the plant’s drag, and in areas of excessive water movement this could easily result in the plant being torn free of the rock and cast adrift.

Its ability to adapt to a range of environmental conditions has allowed bladder wrack to successfully colonise a wide range of mid-shore locations. However, in spite of this versatility, there are several interacting factor that limit bladder wrack’s range on the rocky shore. These include tolerance of drying out when exposed by the tide, ability to compete with other similar species and effects of predation by grazing herbivores on tiny settling bladder wrack plants.

Because of these physical and biological pressures bladder wrack tends to dominate in a very specific band or zone in the middle of the rocky shore. Above that zone, where greater exposure to the air is likely to result in more drying out, it tends to be out-competed by the more resilient spiral wrack (Fucus spiralis). Below that zone it tends to be out-competed by the serrated or toothed wrack (Fucus serratus).

Bladder wrack reproduces by means of special receptacles that begin to develop on the plants sometime around December and which remain present until late summer. Peak fertility occurs in May and June, and eggs and sperm are released directly into the water column when the plants are submerged at high tide. Fertilisation is largely a matter of chance, so to increase the probability of successful reproduction large quantities of eggs and sperm are released. One plant may have more than 1000 reproductive receptacles containing more than 1,000,000 eggs.

Bladder wrack is a common food in Japan and is used as an additive and flavouring in a variety of foodstuffs in Europe. It is frequently used in the manufacture of “Kelp” tablets and powders that are sold as nutritional supplements. A good source of iodine, it is frequently used as an herbal remedy for treating thyroid problems. It is also said to be useful for relieving rheumatism and rheumatoid arthritis both taken internally and by topical application to the inflamed area.