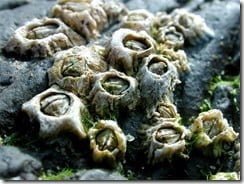 Barnacles are a common sight around Ireland’s rocky shores. These tiny animals form the familiar off-white patchwork that often covers large swathes of rock between the high and low water marks. Barnacles are crustaceans, relatives of crabs, shrimps and lobsters, although they were not firmly accepted as part of that group until as late as the 1830s. Before that the sedentary existence of the adults and their protective calcareous shells often led to them being grouped with the superficially similar molluscs.

The acorn barnacle is the most common type of barnacle found around the Irish coast, and is abundant between the high and low tide marks wherever there is suitable substrate for its larvae to settle on. Adult acorn barnacles are small, and only grow to a maximum size of about 15mm (0.6 inch) long. They have a cone-shaped shell made up of six overlapping calcareous plates with a diamond shaped opening at the apex of the cone. When the tide is out this opening is sealed by another pair of calcareous plates that serve to protect the animal from the lethal drying effects of sun and wind.

Barnacles feed on zooplankton – tiny free-swimming creatures that live in the water column. Once submerged by the incoming tide the adult barnacle retracts the plates sealing the opening and extends feathery legs called “cirri” into the water. If there is a current present the barnacle simply holds the cirri fully extended, letting them filter passing food out of the water. In the absence of a current the barnacle will create its own by rhythmically beating the cirri to induce water movement.

High plankton levels associated with spring and autumn herald a feeding bonanza, and most barnacle feeding activity is concentrated into these two seasons. In contrast they hardly feed at all through the winter when plankton levels are severely depressed.

Like all other crustaceans barnacles need to shed their skin to accommodate growth. In barnacles the rate of growth is directly related to feeding and temperature, so the frequency of the moult is variable. Because barnacles lower on the shore have more time to feed during each tidal cycle they tend to grow more quickly than those higher up the shore, and consequently need to moult more often.

These nauplii are released into the water column between February and May to coincide with the annual spring algal bloom, ensuring that there is a ready source of food available to them. The nauplii spend several weeks feeding in the water column where they undergo a series of six moults before developing into a second larval form known as a “cyprid”. The cyprid is specialised for seeking out a settlement site, and searches the substrate using its antennae. Once it has identified a good site the cyprid fastens itself to the rock and undergoes a metamorphosis into the adult form.

Much of our current knowledge about barnacles is based on the definitive work of eminent biologist Charles Darwin, who dedicated eight years (1846-1854) to studying them. It is likely that this extensive study of barnacles had a significant influence on the development of Darwin’s seminal theory of natural selection that he published in 1859.