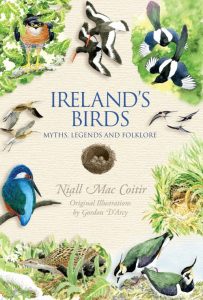 Birds have always held a special draw for me.

It was a a fascination with birds that first kindled my interest in wildlife as a youngster. I guess you could say that they were my first wildlife love, and while I’m interested in all sorts of wildlife today, birds will always hold a special significance. I suspect many wildlife enthusiasts have a similar story to tell.

I’m always interested in finding out more about birds — their populations, their conservation, their biology. Anything really that offers insight into this wonderfully diverse and adaptable group of animals. One area I haven’t really delved into much though is the influence birds have had on human culture.

“Ireland’s Birds: Myths, Legends and Folklore” by Niall Mac Coitir explores these influences, offering a fascinating insight into the significance of various birds through history, and the role they’ve played in shaping our belief’s, customs and superstitions, our well documented myths and legends and other notable facts. It covers a variety of different species or bird groups, arranged seasonally according to the birds migratory patterns or to cultural references the bird is associated with. It begins, for example, with the Robin and it’s strong association with Christmas, and moves on through the seasons from there, covering everything from kingfishers to owls… there’s even a section on the domestic chicken.

It’s packed with fascinating snippets that, while of questionable value in helping you understand the birds themselves, offer a fascinating window into the connection between birds and people in Ireland over the millennia.

Did you know, for example, that in Donegal when two herons were seen flapping their wings at the surface of a river it signifies an approaching storm? Or that clippings from a hair cut should never be left lying about for fear a swallow should find them and incorporate them into its nest, dooming the owner of said hair to headaches all summer long!

The text is punctuated throughout with illustrations by Gordon D’Arcy, in black and white for the most part, but with some lovely colour plates included too. These are not the accurate illustrations of a field guide… with all the precision and detail that entails, but rather creative wildlife art that augments and enhances the reading experience.

As always from The Collins Press, the book is beautifully presented and superbly produced.

Part of a series on Myths, Legend and Folklore by Niall Mac Coitir, this volume on birds is accompanied by others on animals, trees and wild plants. If you’re interested in the historical and cultural connections between wildlife and people in Ireland they’re certainly well worth a look.

You can buy Ireland’s Birds on Amazon.co.uk here or Amazon.com here — and at all good book retailers on- and off-line.