You are here: Home / Wild Blog / Wildlife TV / Nature doesn’t get any wilder than this… and it was filmed in Ireland 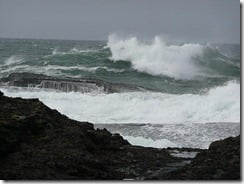 Cornish surfer Mickey Smith hit national television in the UK last week when his short film Dark Side of the Lens featured on the incredibly popular Springwatch series.

It struck me straight away that a lot of the coastline looked like the Atlantic coast of Ireland – and I found out later that much of the footage featured in the short film was shot here, and that Mickey himself spends much of his time here. Dusty the female bottlenose dolphin, who features in the film is a bit of a cetacean celebrity in Doolin, Co. Clare.

The film depicts the raw power of Irish nature at its most awe inspiring and beautiful. It’s striking, thought provoking, and incredibly powerful. If you didn’t see it, you can catch it below. Enjoy….