Ireland is home to some truly phenomenal wildlife.

Our position on the western periphery of Europe, perched on the edge of the wild North Atlantic, makes this a truly special place. The essence of Ireland’s natural heritage is encapsulated in this short video, compiled by Crossing The Line Films. It was screened during “New Horizon’s For Nature”, Ireland’s first National Biodiversity Conference, which took place in Dublin Castle on 20 & 21 February 2019.

The video highlights just a small fraction of the wealth of species we share this island with. Organised jointly by the Department of Culture, Heritage and the Gaeltacht (encompassing the National Parks and Wildlife Service) and the Irish Forum on Natural Capital (a conglomerate of organisations and individuals from academia, public, private and NGO sectors), the conference aimed to highlight the unprecedented rate of biodiversity decline globally and closer to home, bringing together disparate stakeholders to discuss the challenges and explore potential solutions as we strive towards a common goal to reversing biodiversity loss in Ireland. 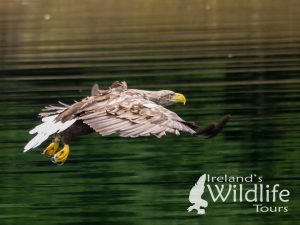 During the first day of the conference, a number of new initiatives were announced by the Government… including:

“We are the last generation that can reverse this trend. And the time for action is now,” said Minister for Culture, Heritage and the Gaeltacht, Josepha Madigan TD. “We are well past the point of well-meaning rhetoric and pious aspirations. Our impact on disappearing nature poses a clear and present danger to this and future generations.”

“Government has an important role to play and our vision is outlined in the National Biodiversity Action Plan. We have also committed to providing €60m funding to protect our natural heritage and biodiversity in Project Ireland 2040. My Department is protecting our National Parks and Reserves, rebuilding the National Parks and Wildlife Service, restoring bogs and carrying out extensive scientific investigation and monitoring of habitats and species. In Budget 2019 we increased funding for our built and natural heritage sector by 15% to €54.3m.”

“So, a huge amount is being done, but we know we need to do more,” said the Minister, highlighting that the initiatives announced during the conference were a sign of the Government’s commitment to protecting and restoring Ireland’s natural heritage.

The minister also acknowledged that success could only come through collaboration with stakeholders at a local level, like farmers, foresters, fishermen, local authorities, businesses and communities.

“I’m asking everyone to lead within their own sphere of influence for a new horizon for nature in Ireland,” she said. “Our rivers, our kingfishers, our woodlands, our salmon, our pollinators, our meadows, our eagles, our whales and dolphins, will not thrive without it.”

The Irish Government and this Minister’s track record on protecting biodiversity and the environment has been questionable at best in the recent past (the passing of the environmentally disastrous “Heritage Bill” last year is a case in point), so while the shift in rhetoric, newly announced measures and the acknowledgement we all need to do more is broadly welcomed, we’ll have to wait and see how much genuine commitment there is behind the words.