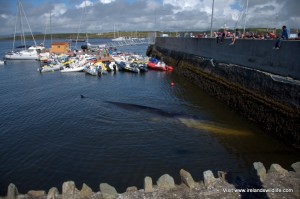 I was getting settled at my desk yesterday morning, pondering what to write for my Irish Independent wildlife column, when the phone beeped. It was a message from Padraig Whooley, sightings coordinator with the Irish Whale and Dolphin Group, telling me that a suspected fin whale had live-stranded in Baltimore, West Cork. He’d be passing my house in a quarter of an hour if I wanted a lift down.

A hastily rescheduled meeting and a scramble for gear later and we were both in the car Baltimore bound.

It was a glorious morning as we entered Baltimore, and made our way down to the busy pier, but the mood of the small crowd gathered there was more sombre. As we looked over the wall we were greeted by the site of a huge whale right in against the pier wall. It was indeed a fin whale, the diagnostic white lower-right jaw and chevron clearly visible. It was astonishing to see the huge bulk of this animal — estimated at 40-50 foot long — in so close to shore.

It simply sat there, breathing occasionally, hardly moving at all and making no attempt to get out into deeper water. I’ve had the privilege of seeing fin whales up close in their element, cruising alongside the boat — and yes it was sad to see this magnificent animal in obvious distress. But it was also an amazing thing to witness. For many people in the gathering crowd it was their first, and perhaps their only, opportunity to see a fin whale. 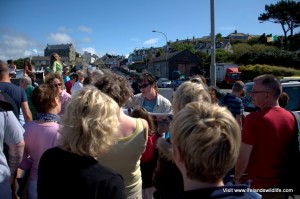 Before long the local National Parks and Wildlife Service ranger and Gardai were on the scene. After a brief discussion the experts soon confirmed what anyone with any knowledge and experience of cetaceans already knew. There wasn’t much that could be done to help, and this whale was going to die where it lay. There’s an extremely high probability that this fin whale was sick, injured or starving before it entered the shallow waters of the harbour. It was already dying, and as soon as it passed between the Baltimore beacon and Sherkin Island lighthouse the outcome was almost inevitable. Given its present position the only thing people could do was to let it die with as little disturbance and stress as possible.

As the day wore on and the whale showed little sign of dying quickly, thoughts turned to the possibility of euthanasia — would it be possible to end this animal’s suffering in a quick and dignified manner? Veterinary consultation ruled out lethal injection as an option on an animal of this size. The only other option would be to shoot the animal through the head with a high powered rifle, but whales have incredibly thick skulls and danger of a bullet ricochetting in a very public place, and not killing the whale cleanly with one shot, meant that it too was soon ruled out.

There was little to do but make sure the whale was as undisturbed as possible in the water, and wait. 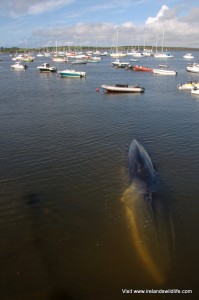 Padraig offered the crowd information and interpretation at various points during the day, explaining a bit about fin whales, large whale stranding, the work of the IWDG and cetaceans in Irish waters. I chipped in when I could, answering people’s questions and trying to offer a bit of perspective on what was happening. Quite a lot of people left the scene knowing a lot more about whales than they did when they arrived. It’s a small but significant positive in a story that, on the surface at least, appears to offer nothing but negatives.

But is it really all bad news?

People are quick to jump to irrational conclusions, and whales evoke an emotional response in people at the best of times. It’s a natural human reaction to look for reasons when a stranding event like this occurs, and there’s a tendency to put two and two together and come up with twenty-two. The truth is that whales die… just like all other animals. Occasionally they come inshore to do so. That can be a harrowing thing to witness, but it isn’t necessarily unnatural. It’s important to base any conclusions on evidence rather than speculation.

We are undoubtedly having a largely negative impact on our oceans, and that’s certainly having a knock on effect on large cetaceans. Perhaps though… just perhaps… the fact that we’re seeing more large whales stranding around Irish and British coasts over recent years reflects a slow but steady recovery in north Atlantic whale populations after decades of persecution.

That theory too needs evidence to back it up, but if it is what’s happening, then this unfortunate stranding could be part of a much bigger good news story.