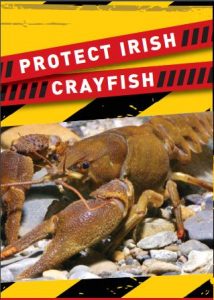 Authorities are urging water users on the River Suir to take precautions after confirmation of an outbreak of Crayfish Plague on the stretch of river downstream of Clonmel to Carrick-on-Suir in Tipperary.

DNA analysis following the discovery of a large number of dead crayfish in the river earlier this month has confirmed Crayfish Plague as the cause. The fungal disease causes 100% mortality in crayfish but has no impact on other freshwater species.

Experts expect to lose the entire population of crayfish from this stretch of the river, but in a concerted effort to restrict its spread to other sections of the Suir and potentially to other waterways across Ireland the National Parks and Wildlife Service, Inland Fisheries Ireland and Tipperary County Council are urging all river users to adopt the “Check, Clean and Dry“ protocol when they leave the river.

All boats, clothing, and any other equipment that comes into contact with water should be treated as follows:

The drying period is particularly important in preventing spread of the disease, as wet equipment can harbour the Crayfish Plague pathogen carrying it from site to site.

This is only the second outbreak of the disease in Ireland, following one in Cavan in 2015. The white clawed crayfish is a globally threatened species, and Ireland’s only native freshwater crayfish. Ireland holds one of the world’s largest surviving populations of the species, which is found in lakes, rivers and streams across much of the country.

Across Europe the spread of Crayfish Plague, which arrived along with introduced North American crayfish, has decimated white-clawed crayfish numbers. Until the Cavan outbreak in 2015 Ireland was considered free of the disease, and it remains the only European country without an established non-native crayfish population.

As well as asking river users to adhere to the “Check, Clean, Dry” protocol, authorities are also requesting that members of the public stay vigilant, and report any sign of mass crayfish mortality or sightings of unusual crayfish (red claws, large size) via email to Colette O’Flynn ([email protected]) at the National Biodiversity Data Centre, Waterford.