You are here: Home / Wild Blog / Guest Post / Does the Pine marten have a role to play in the conservation of the red squirrel?

Following on from research by Dr Emma Sheehy at the National University of Ireland, Galway, a team at Queens University Belfast is trying to shed light on what exactly is going on in the interaction between red squirrels, grey squirrels and pine martens — and they need your help. Researcher Lily Price explains…. 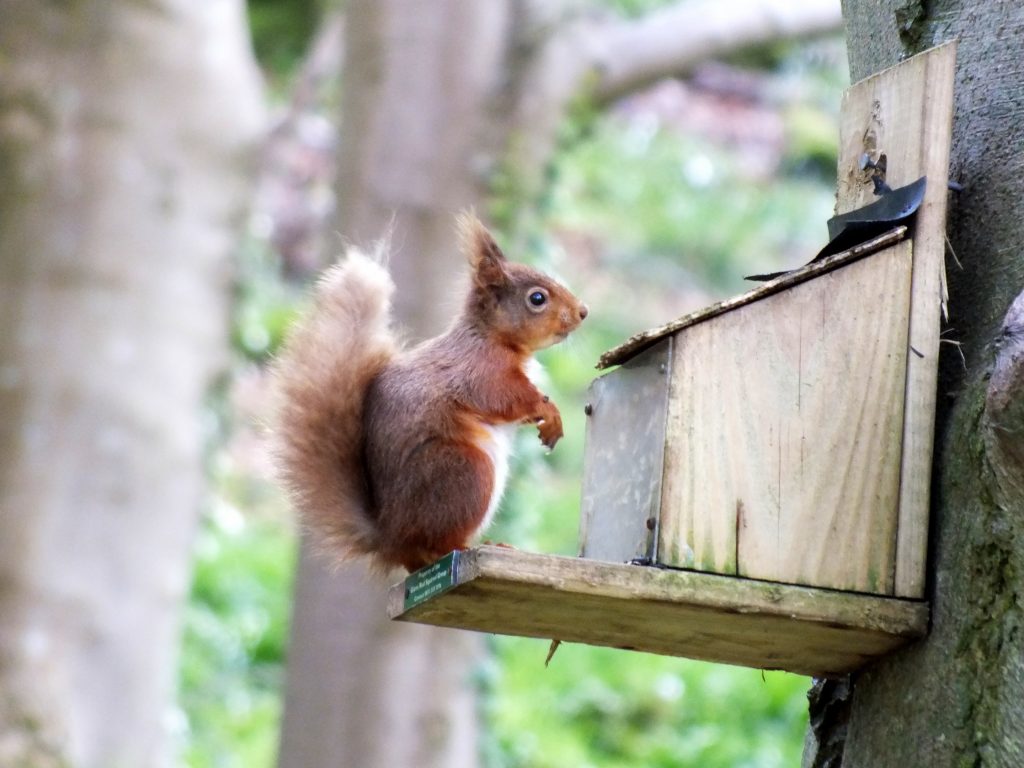 A glimmer of hope for the long-term future of the red squirrel in Ireland appeared last year when a study from the National University of Ireland, Galway found that grey squirrel numbers declined in the Irish Midlands. The authors of this study put this result down to an increase in the range of the European pine marten (Martes martes). Where pine marten numbers were increasing, greys were disappearing and red squirrels were making a comeback after decades of absence.

The pine marten is a mustelid (a relative of badgers and otters) that was once widespread in Ireland but persecution in the 19th and early 20th centuries led to its decline. However, it is making a comeback and it may offer a solution to the grey squirrel problem in Britain and Ireland.

The initial results, collected in the summer of 2014, show that both species are responding differently to the scent of pine marten. Now the project is expanding to collect more data. Recently the project appealed to the Belfast public, looking for people with gardens that regularly have grey squirrels visiting them. Thanks to the local press, the response has been great and efforts are already underway to start recording grey squirrel behaviour from people’s gardens.

We still need the public’s help. This project, named “The Squirrel Predator Prey Project”, is a crowd-funded project. Therefore we are relying on the public to keep this project going. If anyone is interested in conserving the red squirrel they can pledge as little as £1 via our Kickstarter page to help us reach our target goal of £2,198. If we do not reach our target we do not receive any of the funding. In exchange for your pledge you will receive fantastic squirrel related items, ranging from our project sticker to a private nature walk and talk for a school, individual or community group.

In the first week of the project page going live we reached 20% of our funding goal. This is great but there is still a long way to go. If you are serious about the conservation of our native red squirrel then please share our project with friends and family and visit our Kickstarter page to pledge.

For more information on The Squirrel Predator Prey project and for project updates visit the Kickstarter page.

This project is run by Quercus’ ecologist Dr David Tosh and Dr Hansjoerg Kunc, a lecturer in Behavioural ecology at Queen’s. David is also running a citizen science survey investigating the distribution of pine martens and squirrels in 2015. Quercus is responsible for conducting high quality ecological research within the School of Biological Sciences at Queen’s University Belfast.

Assisting in the project is Lily Price, a volunteer who has recently completed her Msc in Animal Behaviour (by research).

Quercus is part of Queen’s University Belfast and is responsible for conducting high quality ecological research within the School of Biological Sciences. One of our main aims is to promote practical and applied collaborations between academia and other organisations, particularly Government.