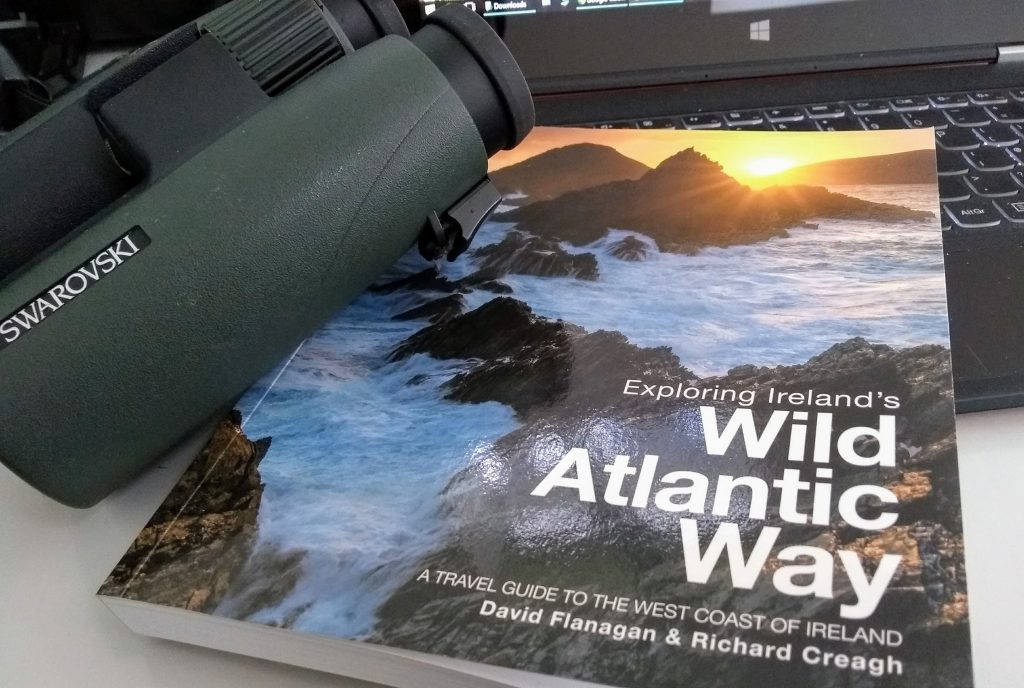 The Wild Atlantic Way, stretching from Donegal in the North to the coast of West Cork in the south, is the world’s longest defined coastal touring route. It takes in the entire length of Ireland’s western seaboard. Ireland’s Wildlife is based on the stunning West Cork stretch of the Wild Atlantic Way, and our Discover Wildlife Experiences, wildlife holidays and birding breaks are focussed predominantly on this impressive and varied stretch of Ireland’s North Atlantic coastline, so I know my local stretch of the route well.

As a certified Failté Ireland Wild Atlantic Way Champion I also have a good working knowledge of the rest of the route, and some of the highlights you can find along the way — but at 2,500km long there’s an awful lot to see and do — so when I’m travelling outside my immediate area it’s always handy to be able to look things up.

Whether you’re planning your trip along the Wild Atlantic Way before your arrival in Ireland, or live here and are slowly exploring it one short-break at a time, having a comprehensive guide to the route and what’s available is invaluable. In the past I’ve used the dedicated Wild Atlantic Way Website, and it works well enough. But no matter how good the website, sometimes there’s no substitute for having a well thought out guidebook in hand. It’s handy before you leave, helping you make informed decisions about the route you take and where you’ll stay, then you can refer to it enroute to fine-tune your journey.

Before a trip to north Co. Mayo recently a copy of “Exploring Ireland’s Wild Atlantic Way” by David Flanagan and Richard Creagh arrived at IWHQ for review. Perfect timing!

This beautifully produced book is stunningly illustrated with photographs capturing the rugged, wild beauty that makes the Atlantic coast so spectacular. If you buy this book, chances are you’ve already decided to visit the Wild Atlantic Way — but if you haven’t, then the photography alone is enough to entice you to do so.

The book covers the entire length of the Wild Atlantic Way, and kicks off with some general introductory information about the route, helpful tips on travelling in Ireland, suggested “must do” experiences, and an overview of the kind of activities you can expect to encounter along the way. I was delighted to see a small but well thought out section on wildlife included here.

The “meat” of the book is the route itself, organised by county, starting with Cork in the south and working north to Donegal. I’ve always felt this a much more logical way to think about the Wild Atlantic Way than the general promotional material which tends to start in Donegal and work south. Perhaps it’s because I’m Cork based… but for me, it’s a matter of logic. If I’m following a route along the Atlantic seaboard, then I’d rather be driving on the same side of the road as the ocean. In Ireland, we drive on the left — so I can’t help feeling it’s better to start in the south and work north. I don’t really want oncoming traffic between me and the sea. 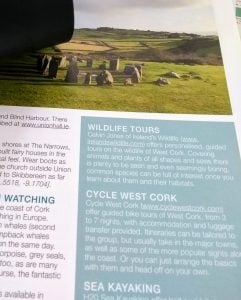 On opening the book I naturally turned to the parts of the Wild Atlantic Way I know best — my home-patch around Rosscarbery, Glandore and Union Hall in West Cork. I was pleased to see the authors had included all of the “usual suspects” in terms of places to see and things to do in the area. There’s even a mention of our guided wildlife tours on page 47… which I knew nothing about until I turned to that page in the book. Thank you David and Richard!

All of the information is logically laid out, concise, accurate, relevant and, for now at least, current. All good — and suggested I could use this book with confidence for parts of the route I’m less familiar with. To put that theory to the test my wife and I used it for a recent short-break to Mayo, and found it a very useful companion.

Did we see anywhere we would have missed without the book? Probably not — the Wild Atlantic Way is very well signposted and key locations are well marked with the signature Wild Atlantic Way sculptural steel markers. Did the book make the whole process of deciding where to stop and what to do easier? Undoubtedly.

If you’re heading to Ireland’s Atlantic coast and want a guide to help you experience the best the Wild Atlantic Way has to offer, I’d recommend this book without hesitation.

Buy the book on Amazon.co.uk | Amazon.com
|