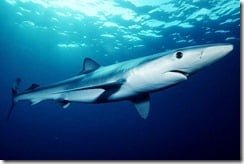 Sharks don’t spring immediately to mind when you think about Ireland’s wildlife. Nevertheless, the waters around our island nation play host to a number of shark species, including the huge basking shark, second largest fish in the sea, which grows to an astonishing 14 metres (c. 46 feet) long; the mako shark, one of the fastest of all fish, and the most widespread of sharks, the blue shark.

As the name suggests, blue sharks are predominantly blue – ranging from a deep indigo blue on the top of the back, fading to vibrant blue on the flanks and to white on the underside of the belly. This colouration affords the shark a form of camouflage known as countershading. Viewed from above the deep blue blends with the murky ocean depths below; viewed from below the white underside helps the shark to blend in with the light coming from the water’s surface. Countershading is a common camouflage strategy employed by open ocean or pelagic species.

This is a large, sleek, slender-bodied shark with long, pointed pectoral fins, a pointed snout and large, prominent eyes. It has two dorsal fins, the first much larger than the second, and what’s known as a heterocercal tail – where the upper lobe is markedly larger than the lower one. It is a graceful cruiser designed to cut through the water effortlessly. Blue sharks are often observed swimming slowly near the surface, but are capable of explosive bursts of speed.

Blue sharks are the most widespread of all the world’s sharks and are found in temperate and tropical waters in the Atlantic, Pacific and Indian oceans from latitudes of 50oN to 40oS, and from the surface to depths of around 350 metres (1,148 ft). They tend to prefer cooler water, in the range of 7-16°C (44.6-60.8°F), although they can tolerate warmer water up to 21°C (69.8°F) or higher. They are nomadic, and capable of travelling huge distances.

In the north Atlantic the population is thought to follow a clockwise migration pattern travelling with prevailing currents. Sharks caught in Ireland are tagged and released, and one such shark – tagged off Loop Head, Co. Clare – was re-caught off the coast of Venezuala, some 4,250 miles away.

As an apex predator the blue shark sits at the top of the food chain, and healthy adult individuals are generally not at risk of predation by other species (with the exception, of course, of man), although larger sharks may pose some threat. Blues feed mainly on smaller prey, predominantly schooling fish and squid, but will readily take larger prey items such as smaller sharks, marine mammals and carrion should the opportunity arise.

Blue sharks are viviparous, which means they give birth to live young. The gestation period ranges from 9 to 12 months, and results in litters of anything from 4 to 135 pups, depending partially on the size of the female concerned. Average litter size is from 25 to 50 pups. Blue sharks mature at five to six years old, and are known to live for up to 20 years.

Although blue sharks are among the most abundant, widespread and fastest growing of the world’s shark species, they are also the most heavily fished sharks in the world. An estimated 10 to 20 million blue sharks are caught and killed each year, causing concern not only for the future of the sharks, but also about the potential impact of removing such a key predator from the oceanic ecosystem.