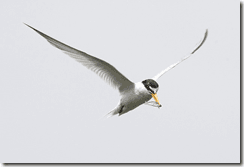 I have a soft spot for Little Terns.

The salt marsh, sand dunes and beach in Gronant, North Wales, where I grew up, played a huge part in nurturing a growing passion for nature in general and birds in particular when I was young – and little terns played their part. The beach at Gronant, on the mouth of the Dee Estuary, is home to Wales’s only remaining colony of little terns.

I remember as a boy eagerly anticipating the return of these diminutive but charismatic seabirds each spring, and lamenting their departure late in the summer. I’d spend long hours during the breeding season near the warden’s hut… and occasionally in it sheltering from the rain… watching the terns’ antics as they squabbled, fed their young, mobbed passing predators and generally got on with the business of rearing the next generation.

So it’s great to read that the little terns in Gronant are thriving. Last year the colony boasted a record total of 114 breeding pairs that reared an impressive 216 fledglings.

But back to Ireland… and our largest little tern breeding colony in Kilcoole, Co. Wicklow (click on the link to follow the trials and tribulations of the colony this year on the brand new blog).

The Little Tern is the rarest of Ireland’s five breeding tern species, with a national population that fluctuates between 200 and 250 pairs annually. It is listed as an ANNEX I species under the EU Birds Directive and has been Amber-listed under the Birds of Conservation Concern in Ireland. The colony at Kilcoole, Co. Wicklow, is currently the largest in the country with between 50 & 80 breeding pairs, with smaller colonies are dotted around the coasts of Louth, Wexford, Kerry, Galway, Mayo and Donegal.

Since 1985 the breeding colony at Kilcoole has been afforded on site warden protection for the duration of the breeding season thanks to a joint initiative between Birdwatch Ireland and the National Parks and Wildlife Service. For more info on the little terns in Kilcoole don’t forget to check out the Kilcoole Little Tern Conservation Project blog, and check back regularly to keep up-to-date with their progress. I know I will be.