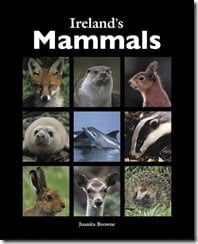 Did you know that Ireland’s largest mammal is the blue whale – the largest animal ever to have lived on earth. This oceanic leviathan weighs in at over 100 tonnes (or about the same as 33 African elephants, if you’re counting) and can be up to a staggering 33.5 metres long. That’s bigger than the largest of the dinosaurs. Although extremely rare today, some 30–50 blue whales are thought to pass through Irish waters each year.

Our smallest mammal, by contrast, is the pygmy shrew. No bigger than your thumb it’s found all over Ireland, is active all year round, and it’s weight can drop to a tiny 3g in the winter. At birth these marvels of miniaturisation weigh just 0.25g.

Unearthing facts like these about Irish mammals used to mean wading through dry academic reports, trying to extrapolate from out-dated information in obsolete text books or making educated assumptions based on information from other countries. Now all you have to do is get your hands on a copy of “Ireland’s Mammals” by Kildare based author Juanita Browne.

The first thing you notice about “Ireland’s Mammals” is its good looks. Striking black livery is punctuated by simple white text and a grid of nine striking photographs that leap off the dust-jacket and entice you to take a look inside. As soon as you do, you realise that this is no stuffy text-book or academic reference – this book has soul.

You can’t help but get swept up in the energy and enthusiasm that Juanita Browne injects into her prose, and before you know it you’ve finished the five page introduction. Already you’ve covered what a mammal is, where mammals live and the special adaptations that have allowed them to colonise practically every environment on earth.

Now you get to the heart of the book – the species profiles. There are 39 in all, covering familiar and not-so-familiar characters that share our countryside, our towns, our cities and our oceans. One by one Juanita introduces us to Ireland’s most secretive and elusive group of animals. Each species has an in-depth description that tells you what it looks like, where it lives, what it eats and when it breeds.

The text is comprehensive, authoritative, and above all compelling. While it undoubtedly informs, this book also entertains. The text is complimented throughout by some of the most stunning images of Irish wildlife that you’re ever likely to see. There are also helpful illustrations that show each animal’s size relative to a human, and to help clarify concepts explained in the text. As a package it’s hard to beat!

The book has an Irish language section, with a brief overview of each species “as Gaeilge”, there’s a section on Ireland’s National Parks and Wildlife Service, a comprehensive list of wildlife and conservation contacts, a short profile for each photographer, a suggested list of further reading and a glossary of terms. You couldn’t ask for a more thorough treatment of the subject matter.

Although this is Juanita Browne’s first book, “Ireland’s Mammals” has already been lauded as a universal success by such Irish wildlife luminaries as wildlife artist and broadcaster Don Conroy, wildlife journalist Michael Viney and wildlife expert, author and broadcaster Éanna Ní Lamhna.

Juanita caught the nature bug from her father as a young girl, and it’s been with her ever since. It was a fascination that ultimately led her to study zoology at Trinity College, and her desire to tell the story of Ireland’s wildlife to the masses led her to pursue a masters degree in media studies.

After working for RTE and various newspapers Juanita went on to edit the popular wildlife magazine “Wild Ireland”, which was named Consumer Specialist Magazine of the Year in 2002 under her editorship. She currently edits “Heritage Outlook”, the magazine of the Heritage Council, and works as a freelance editor and graphic designer.

In “Ireland’s Mammals” Juanita Browne set out to bring the story of Ireland’s mammals up to date and to deliver it to a wider audience. Achieving the first of those goals required dedication – the second required talent. Reading the book it’s obvious that Juanita Browne is lacking neither. “Ireland’s Mammals” is an ideal reference book for schools, libraries and homes… but it’s also much more than that. It’s a riveting read that will help foster an abiding appreciation of our natural heritage in anyone who opens it… and that’s an outstanding achievement!

You can get hold of a copy of Ireland’s Mammals on Amazon.