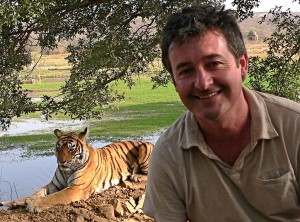 Dublin wildlife cameraman Colin Stafford Johnson’s tale of the journey of a wandering tiger across the Indian sub-continent has been nominated for two Emmy awards in the prestigious National Academy of Television Arts and Sciences in the USA.

The Crossing the Line documentary “Broken Tail“, follows Stafford Johnson’s quest as he tracks a  the journey of a remarkable wild tiger with the same name. It has received wide international acclaim, securing prime-time slots in Ireland, the UK and across Europe, the USA and Canada. The was recently named “Best of Festival” at not one but two of the world’s most prestigious wildlife film festivals, beating productions from industry heavy-hitters like the BBC and Discovery.

Now nominations in the “Outstanding Nature Programming” and “Cinematography” categories at the world’s most prestigious television awards ceremony is the icing on the cake for a truly exceptional Irish wildlife production.

“We are delighted that Broken Tail has been honoured in this way by the Emmys with such truly formidable opposition as the very best output of the BBC & Discovery,” said the film’s director, John Murray. “It is an Irish film about an Indian subject that has hit a chord with primetime audiences worldwide.”

The film received crucial backing in Ireland from RTÉ and The Irish Film Board, and internationally from CBC in Canada, ZDF &SWR in Germany, BBC in the UK and PBS in the USA.