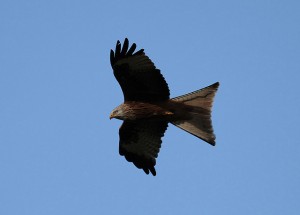 An Irish-hatched red kite has successfully reared a brood of young in Ireland for the first time in almost 200 years.

The male bird was hatched in Ireland  in 2010 to Welsh “donor” parents released as part of the red kite reintroduction project coordinated by the Golden Eagle Trust. This Irish bred kite successfully raised two chicks this season at a nest site in Redcross, County Wciklow in partnership with an older female released as part of the original cohort of Welsh donor birds in 2007.

It marks a significant milestone in the reintroduction of this iconic bird of prey to the Irish countryside.

“This is the first time a wholly native red kite has been recorded as breeding in Ireland since the early 19th century,” project manager Dr Marc Ruddock told reporters. “The level of co-operation and support from the local community and farmers has been phenomenal.”

However, it hasn’t all been good news for Ireland’s reintroduced kites this breeding season. According to the Wicklow project’s 2012 report the team located 24 breeding pairs, of which 17 laid eggs. But poor weather conditions during the breeding season, with strong winds and heavy rain, destroyed at least six nests. In total 11 pairs bred successfully, rearing 23 young kites between them.

Fifty two red kite chicks have now successfully fledged in Co. Wicklow since breeding commenced in 2010 from a pool of 120 released birds. Kites start breeding from 2 years of age, so while the chicks reared by this Irish-hatched male only have half-native parentage, it won’t be long before 100% Irish-born kites are breeding successfully in Ireland again.