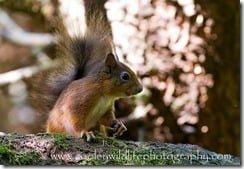 Wildlife experts have expressed concern at reports that a second native red squirrel has died of the deadly squirrel paropox virus in Co. Wicklow.

The squirrel was discovered near Kilmacanogue, Co. Wicklow suffering from the disease, which is described as being similar to myxomatosis in rabbits. The squirrel pox virus is carried by the non-native grey squirrel, which does not succumb to it, but can pass it on to its native cousin, with often devastating consequences. The disease invariably proves fatal to red squirrels, which generally die from 4-5 days after contracting the virus.

This second case was confirmed by Dr Ferdia Marnell of the National Parks and Wildlife Services on Friday and comes hot on the heels of a record of the disease from the Hollywood area of Co. Wicklow just before Christmas.

Dr Ferdia is appealing for members of the public to contact The National Parks and Wildlife Service if they notice squirrels displaying “myxomatosis-like” symptoms. These include runny or puffy eyes; scabs or lesions on the skin, often with swelling and discharge; general lethargy and disorientation.

“This is the first time we have seen this disease in the Republic,” said Dr Marnell, going on to stress that although there are no known cases of squirrel pox virus infecting people, the public should avoid handling sick or dead squirrels that they encounter.

Update 19/01/2012: A third case of squirrel parapox virus has been confirmed after an animal suffering from symptoms was discovered in south County Dublin earlier this week.