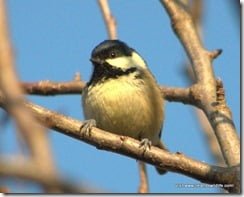 The coal tit is one of the “usual suspects”, commonly seen at practically every peanut feeder in Ireland. Over the winter this tiny bird, one of our smallest, is a regular visitor to garden birdtables and feeders. It has a particular penchant for peanuts, and should the opportunity present itself the enterprising coal tit will make repeat visits to the supply, carrying away nuts to horde in its own private stash.

Coal tits are small birds – adults reach 10-11.5 cm (c. 4-4.5 inches) in length, have a wingspan of between 17-21 cm (c. 6.75-8.25 inches) and weigh between 8-10 g (0.25-0.35 oz). Coal tits share the familiar pattern of a black head and striking white cheek patches with a number of other tit species – but the coal tit is the only one with a distinctive white patch on the nape of the neck. The back is grey and the underside light. Coal tit sexes appear similar – although females generally have a slightly narrower, browner bib than the males. Juveniles are generally duller than adults, and are browner above and more yellow below.

There are at least eight sub-species of coal tit, and Ireland boast its very own race of this charming little bird – Periparus ater hibernicus. The Irish race is distinguished from its British counterpart by a distinct yellow tinge to its white cheek patches and nape.

Like other tits the coal tit is an acrobatic bird, and often hangs upside-down as it forages for food in the treetops. These are originally woodland birds, and the coal tit’s small slender bill is perfect for foraging between conifer needles and for picking out conifer seeds. They favour conifer forests, although they also breed in mixed forest, parks and gardens where suitable conifer growth occurs.

Coal tits are resident in Ireland all year ’round and don’t migrate. In winter they form mixed flocks with other tits and roam woodlands, parks and gardens in search of food. This is when they are at their most conspicuous, and when you’re most likely to notice them clamouring around your garden bird feeders. They feed mainly on seeds, nuts and a variety of insects, grubs and spiders. Their flight is fast and flitting, and they will sometimes hover briefly to get at food on the underside of inaccessible leaves and twigs.

Outside of the garden setting, coal tits are more often heard than seen. In woodland their distinctive “coo-tee, coo-tee” call is a common sound. They have a substantial repertoire of calls and songs generally similar to those of the great tit, although their voice is thinner and more sibilant than that of their larger cousins.

Breeding starts April or May, and nests are normally constructed in tree holes, old walls, rotting tree stumps or banks, often close to the ground. They also use artificial nest boxes. The nest itself is a cup of moss lined with animal hair or wool. The female lays seven to eleven white eggs with pink spots and incubates them for 14-16 days. Both parents care for the chicks once they hatch, and young typically fledge after 18-20 days. In general coal tits rear one brood per year – but when conditions are favourable may manage two.

Coal tits are common and widespread throughout Ireland and are not considered threatened. They are one of the few bird species to have benefited from the proliferation of conifer plantations over recent decades. There are an estimated 270,000 breeding pairs in Ireland.