You are here: Home / Features / Feature Articles / Wildlife highlights of a memorable year

Life is punctuated by years that are particularly memorable for wildlife. Calvin Jones looks back at some of the highlights of the 2016 wildlife year on the West Cork stretch of Ireland’s Wild Atlantic Way. 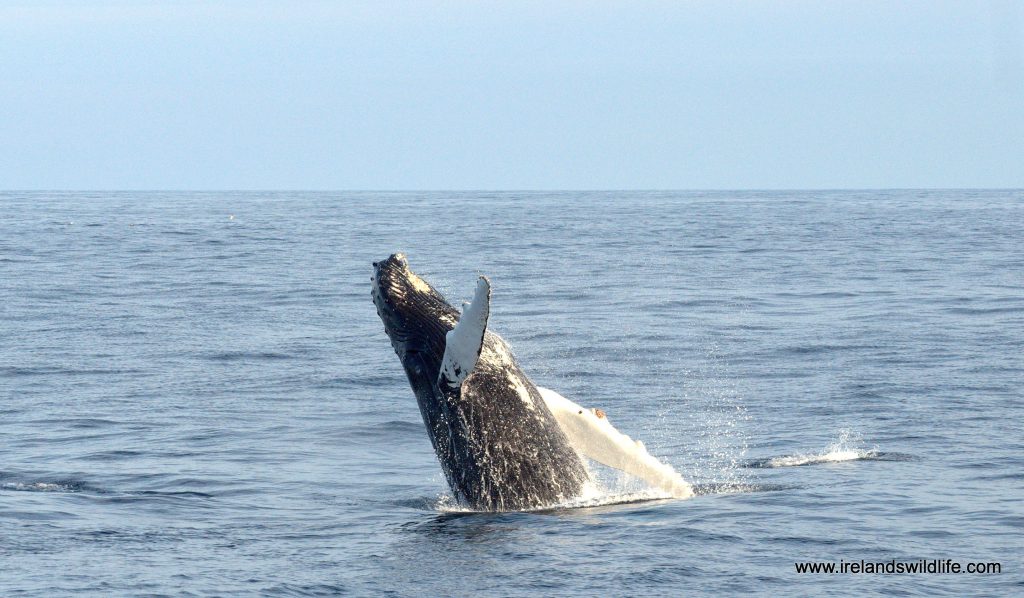 With 2017 well underway I’m looking forward to the wonderful wildlife encounters the year undoubtedly has in store, but I also can’t help looking back at the year just passed… and what a wildlife year it was!

So here’s a quick recap of my most memorable wildlife moments from the West Cork stretch of Ireland’s Wild Atlantic Way in 2016.

Found by local wildlife enthusiast and birder, Fionn Moore, this glaucous-winged gull was a first for Ireland, and a real must-see for any Irish birder within striking distance.

While at first glance it looks a lot like a herring gull, this bird breeds on the pacific coast of north America, across the the island chain spanning the Bering Sea to the east coast of Russia. It usually spends its winters along the western seaboard of  the US and Canada, and as far west as Japan and North Korea (far east from here, but west of their breeding range, if that makes sense).

It was a long way from home.

There’s always an incredible buzz when you see a new species for the first time… and this got 2016 off to a flying start!

Speaking of flying starts, early in the year is also the best time to see waders overwintering on estuaries around the Irish coast. While the term murmuration is usually reserved for large flocks of starlings, every winter Rosscarbery, home of our signature Discover Wildlife Weekends, hosts thousands of golden plover that migrate here to make the most of our comparatively mild climate.

While not quite as elaborate as the displays put on by starlings, watching large flocks of this lovely wader take to the sky can still make your breath catch in your throat.

These attractive waders migrate from their breeding grounds in Iceland to spend the winter on Ireland’s “balmy” shores. Our guests often describe the spectacle as one of the highlights of their wildlife tour, even on trips when we’ve seen species like humpback whales or white-tailed eagles.

It’s certainly a wildlife moment that lingers in the memory… especially when the flock has been sent skyward by a passing peregrine falcon.

The spring and summer of 2016 will go down as a bumper year for basking sharks off the West Cork coast. These giant fish, second only to the whale shark of the southern hemisphere, can reach 10 metres in length and weigh upwards of 6 tonnes.

At times last spring it seemed that you couldn’t go near the coast without spotting a basking shark — they were that numerous. I remember standing on a coastal vantage point in May counting more than a dozen dorsal fins in a small area of Rosscarbery bay. On our spring Discover Wildlife Weekend we were literally surrounded by sharks on our marine wildlife boat trip with our whale watching partner Cork Whale Watch.

A carpet of bluebells is a wondrous thing to behold. I have a few favourite spots I try to get to every year on our spring Discover Wildlife Weekends, and it’s always a favourite with guests. One of Ireland’s spring must-sees.

Humpback encounters are always special, and 2016 provided its fair share. The most memorable was this encounter in May. I was out guiding a small family group on one of our custom wildlife tours. We’d had a fantastic day watching all sorts of wildlife from basking sharks to choughs and jays, wildflowers and butterflies to common dolphins, minke whales, and more. But with the day drawing to a close, the best was yet to come.

As we were watching a group of around 100 common dolphins from the sublime coastal vantage point that is Toe Head I picked up some splashing south-west of a rock formation known as the stags. I quickly trained the scope on the spot and discovered two humpback whales, and for the next half-hour or so we had great views through the scopes of them breaching, tail slapping and flipper slapping. I called the Irish Whale and Dolphin Group’s (IWDG) sighting’s officer to report the humpback sighting, and a few minutes later got a call back to say they were scrambling local whale watch operator Colin Barnes of Cork Whale Watch to go out and try to get photo-ID shots of the whales, and unbelievably we were offered the opportunity to tag along.

It took us about an hour to hook up with one of the humpbacks, which had split up by that time. It was putting on quite a show… breaching dozens of times, lob-tailing and flipper slapping, and of course raising its tail clear of the water as it dived (fluking).

The IWDG got the vital photo ID  shots and everyone on board had a wildlife experience that will be indelibly etched into their memory for life.

Eddie the Eagle they called him when he fledged as the first Cork born eagle to take to the conty’s skies in well over a century. He presumably earned the moniker on account of his ungainly maiden flight, but we first encountered Eddie much earlier in his development, on our spring Discover Wildlife Weekend in early May.

We had no idea the treat that was in store as we headed down the West Cork coast to where I knew Eddies parents had attempted to breed unsuccessfully in previous years. We were hoping to maybe catch a glimpse of the adult eagles coming and going to the nest site… but we ended up with much more than we bargained for.

Watching through scopes from our vantage point on the mainland we saw an adult bird fly in, a fish clutched in its talons, then tearing off strips of food and feeding them to the tiny chick. A little later we ventured out on one of the commercial ferries traversing the bay for a closer look, and again our luck was in as the female flew in to feed the chick just as we were passing (although susceptible to disturbance at the nest the birds are accustomed to the ferries, and pay them no heed — and I always get the all-clear from the local National Parks and Wildlife officer before taking a group out to ensure the birds’ welfare always comes first).

You can see more photos of this incredible eagle encounter here.

Everyone was buzzing when we got back to the mainland after a magical Irish wildlife experience — and it ranks as one of my top five global wildlife moments… practically on my doorstep!

Baby Seals… what’s not to love

Autumn marks the pupping season for grey seals around the Irish coastline, and it’s always a treat to see the white-coated youngsters sheltering in secluded rocky coves with mum keeping a watchful vigil nearby.

When conditions are right the West Cork coast is one of the best places in Europe for shore based whale watching. Tony and Tina from Shropshire enjoyed some fantastic views of lunge feeding fin whales on one of our custom Discover Wildlife tours in October, as well as getting up close and personal with several Portuguese Man-o-war on a West Cork beach and hooking up with a yellow-browed warbler, a firecrest and a merlin on Galley Head… it was one of the most memorable wildlife days of a year full of them.

If there was an “unusual” wildlife event that defined 2016 it had to be the arrival of large numbers of Portuguese Man-O-War along the Irish south coast. Pushed north by a steady stream of southerly autumn winds these strange colonial animals were a regular site on our Discover Wildlife Experiences last autumn.

Risso’s dolphins are a large dolphin species that are regular visitors to the Irish coast, though infrequently seen. An encounter with this enigmatic species is always a treat, but to come across a group with not one but two mother and calf pairs was simply magical.

The red-flanked bluetail is a bird that breeds in northern Asia and north-eastern Europe, migrating to the balmier climes of Southeast Asia in winter. It’s not a bird you normally expect to see anywhere near Ireland, but they do turn up occasionally during spring and autumn migration.

I’d missed one on nearby Galley Head in spring of 2012 (Ireland’s third ever record), so when one was found on Mizen Head last Autumn I had to go down and see it. What a bird!

Until recently buzzards were pretty scarce on the Irish south coast. Driven to extinction here in the late nineteenth century buzzards naturally recolonised Northern Ireland in the 1930s, and have since spread gradually south and west across the country. While the breeding population is still skewed largely to the north and east of the country, buzzards are becoming a common site in many counties, and we’re seeing more and more of them turning up down here on the south coast.

A friend called me one day in December to say he’d been watching six (yes six) buzzards feeding in a field not far from his house that evening. I met him the next morning and we set off for the field, thinking the birds would have moved on, but hoping they’d still be around. We were in luck… four of the six were still there, sitting in the trees and periodically dropping to the ground to gorge themselves on whatever invertebrates were present.

All things considered 2016 was a pretty amazing year for wildlife here on the West Cork coast. I hope you had some fantastic encounters of your own… wherever you are… and would love to hear about some of them in the comments below.

I’ll be leading 5 of our signature Discover Wildlife Weekends this year. Based in the Celtic Ross Hotel in Rosscarbery these weekends are all about getting out and experiencing this stunning region of Ireland, making wildlife memories, and meeting like-minded people who are passionate about the natural world around them.

The weekends run from Friday evening to Sunday lunchtime on the following dates:

If you’d like to join me you can book your place here.