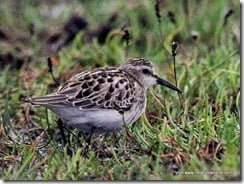 That’s why I found myself standing outside in foggy drizzle at daft-o’clock on the morning of Tuesday 27 September. That’s why three of us drove through the misty darkness from West Cork to the far west coast of County Kerry.

No garages open – no breakfast rolls to be had – and as last to be picked up I got the back seat.  When he’s hunting ticks @CorkBirdNews doesn’t do slow. An hour in to the journey, hurtling down pitch black country lanes, I was feeling decidedly queasy. 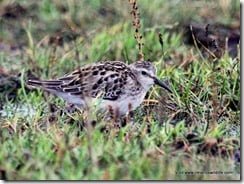 The bird in question today was a least sandpiper (Calidris minutilla) a tiny American wader that, when it touched down on a saltmarsh on Ireland’s southwest coast, suddenly became a much bigger bird.

Bigger in the sense that, despite being a common bird on its home turf, this side of the Atlantic the least sandpiper is a big deal. It’s a very rare vagrant (this one was only the seventh ever recorded in Ireland, I think). Being rare doesn’t make a bird intrinsically more “special”, but it does mean that opportunities to see it in the wild here are few and often far between.

With birds, as with anything else, scarcity tends to intensify the allure.

I’ll never be a full on twitcher. I prefer to do most of my birding “on patch”, or at least close to patch, and while I naturally get a kick out of seeing a rare bird, I’m still fascinated by the antics of many of our more common species: the birds we get to know really well, but that are still capable of surprising us regularly.

Occasionally though everything dovetails nicely, and I get the opportunity to go in search of a rare bird that’s turned up somewhere else. For the briefest of periods I slip into twitching mode – and I admit it is exciting… the sense almost of stalking your quarry… the headlong rush to get there before the bird flies away, the nervous tension and anticipation as you try to locate the veritable needle in the haystack.

A couple of buff breasted sandpipers as we entered the salt marsh got the morning’s activities off to an auspicious start. Then one of the birders I’d travelled with located the least sandpiper, which promptly disappeared into cover before anyone else got a glimpse of it.  As we made our way towards him we were joined by three other birders who’d travelled to see this elusive wader. Six pairs of eyes and a battery of expensive optics scoured the vegetation.

It never re-emerged, and for a while we thought we’d lost it. Then, as we walked slowly up the marsh @corkbirdnews spotted a small wader on the ground right in front of us. It was the least sandpiper – a cracking little bird, it has to be said, and we were treated to some truly remarkable views. Which is just as well – because it’s likely to be quite some time before the opportunity to see one in Ireland comes around again.

At the end of the day of course it is “just a bird” – but in much the same way that the all-Ireland final is “just a game”, or a pair of Jimmy Choo’s are “just shoes”.