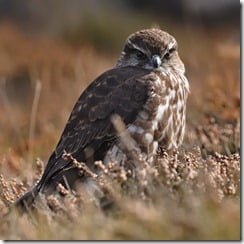 Extreme speed and diminutive size are the signature characteristics of the merlin, Ireland’s smallest raptor. This is a very agile bird, flying low to the ground at great speed as it twists and turns after its prey.

Adult merlins are only 32-39cm (12.5-15.5 inches) long with a wingspan of 65-82cm (25.5-32 inches) and weigh just 130-300g (0.3-0.7 lb). Despite its tiny size this bird is a fierce and tenacious predator that readily takes a wide range of small birds on the wing, and supplements its diet with small mammals and large insects. Occasionally merlins will tackle bigger quarry, and have been known to take birds larger than themselves, including lapwing, teal and even ptarmigan.

In common with other falcons male merlins are smaller than their female counterparts – barely bigger than a large thrush – and have blue-grey upperparts with a black tip to the tail and dark wing tips. In the field females appear a uniform brown above with heavy streaking on the underside. Immature birds of both sexes reassemble the female, but show lighter streaking on the underside. When viewed at close quarters the merlin has a much less obvious facial moustache than any other Irish falcon.

In Ireland the merlin is a scarce resident, with an estimated 100-200 breeding pairs patchily distributed around the country. It breeds predominantly in remote upland areas, dry and wet heath and on areas of raised and blanket bog. Numbers are swelled in winter as adults from Iceland move in to take advantage of our milder climate. During the winter months the birds move into a wide variety of lowland habitats, especially around the coast where they can sometimes be seen darting across beaches or hunting over coastal marshland.

Merlins tend to rely on their speed and agility to capture prey in level flight, although they occasionally employ the high-speed stooping technique typical of other falcons. A hunting merlin will normally set up a vigil from an elevated perch like a fence post or tree stump, although they have been recorded using grazing sheep. Once prey is spotted the falcon launches a high-speed surprise attack, flying low from the perch hoping to take its victim unawares. If the other bird spots the predator however longer pursuits can ensue, and despite the merlin’s speed and agility its prey often eludes it during these high-speed chases. Mated pairs have been recorded hunting cooperatively to increase their chances of success.

Breeding takes place from early May onwards. Males arrive at the breeding area first and make frequent short flights from perch to perch calling repeatedly before pairing up with a female. From April to June 5-6 buff eggs, heavily marked with reddish spots, are usually laid in a nest on the ground, although merlins will sometimes use old crows’ nests. The female incubates the eggs for 28-32 days and the young birds fledge after a further 25-30 days. The male feeds the female and the chicks until they are old enough for the female to leave the nest, at which point both parents hunt to feed their hungry brood. Adults are extremely aggressive around the nest and actively drive away intruders.

Merlins remain scarce in Ireland, and their preference for remote upland habitats and their patchy distribution mean that even where they do occur they are rarely encountered. In common with other birds of prey the merlin suffered heavily from pesticide poisoning in the 1950’s and 60’s. Populations across northern Europe have been recovering slowly, but it’s a recovery hampered by the continued widespread loss of the birds’ preferred upland breeding habitats.

Image credit: Some rights reserved by polandeze via Flickr