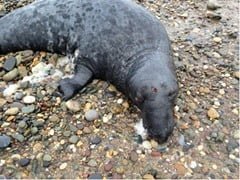 The Irish Wildlife Trust (IWT) is calling on the National Parks and Wildlife Service and Gardaí to launch a full investigation into the killing of seals in Co. Waterford.

Two grey seals were discovered on Tuesday 21 February near Tramore, Co. Waterford with horrific gunshot wounds to the head. The suffering animals were euthanized humanely under veterinary supervision.

Grey seals are a protected species under both Irish and European wildlife legislation. The IWT is wants the relevant authorities to investigate this illegal and exceptionally cruel act and ensure that those responsible are prosecuted. It is vital, says the Trust, to “demonstrate that the law will be upheld and such barbaric acts will not be tolerated”.