You are here: Home / Archives for whales and dolphins 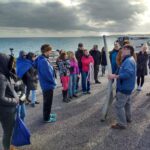 The Irish Whale And Dolphin Group (IWDG) is hosting free shore-based guided whale-watching events around the Irish coast on Saturday 21 May to mark National Biodiversity Week. IWDG personnel will lead events in 5 counties, assisted by local members and experienced observers who will share their skills and experience on the day. It offers a fantastic opportunity to learn more … END_OF_DOCUMENT_TOKEN_TO_BE_REPLACED

The Irish Whale and Dolphin Group (IWDG) has announced a positive match between a Humpback Whale photographed at feeding grounds off the Irish south coast in 2015, and an animal photographed at breeding grounds in the Cape Verde Islands off West Africa in April of this year.This is the first ever match between one of the 92 whales (at the time of writing) in the Irish … END_OF_DOCUMENT_TOKEN_TO_BE_REPLACED 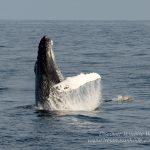 Life is punctuated by years that are particularly memorable for wildlife. Calvin Jones looks back at some of the highlights of the 2016 wildlife year on the West Cork stretch of Ireland's Wild Atlantic Way.With 2017 well underway I'm looking forward to the wonderful wildlife encounters the year undoubtedly has in store, but I also can't help looking back at the year … END_OF_DOCUMENT_TOKEN_TO_BE_REPLACED 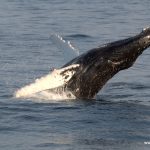 Whales and dolphins are an exciting part of Ireland's wildlife. As an island nation perched on the edge of the north east Atlantic we have some of the best whalewatching in Europe right on our doorstep. This in depth feature will help you spot whales and dolphins around the Irish coast, from shore and when you're out on the water.Ireland -- one of Europe's … END_OF_DOCUMENT_TOKEN_TO_BE_REPLACED

The Irish Whale and Dolphin Group (IWDG) continues it's annual all-Ireland synchronised whale-watching event in 2016, with this year's event scheduled for Saturday the 27 August between 2pm and 5pm.Timed to coincide with Heritage Week, the event, supported as always by Inis Cologne, takes place simultaneously at 20 headlands around the Irish coast, and is free and open to … END_OF_DOCUMENT_TOKEN_TO_BE_REPLACED