You are here: Home / Wild Blog / Miscellaneous / The chicken and the fox: unpredictable nature 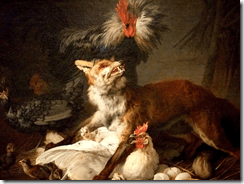 Warning! The wildlife connection in this post may be a bit tenuous… but please bear with me. Sometimes you just need to vent.

We’ve had the chickens a couple of months now. Four ex battery hens that, after a rocky start, have settled in to their new life of free-range roaming, and have been laying an average of three eggs a day for the last few weeks. All was well with their little chicken world.

Until yesterday, when disaster struck! A fox paid us a visit in broad daylight, took one hen and injured another.

It was late Sunday afternoon, and with nothing much planned I decided to head out for a stroll to see what wildlife was around my local patch. Little did I suspect that the local wildlife would be doing house-calls in my absence.

A fox doing what foxes do

It was always going to happen keeping chickens in the country, but knowing that doesn’t make the reality any easier to stomach. It’s amazing how quickly you become attached to a bag of feather-covered-bones.

Yes, I know the fox is only doing what comes naturally. I know that at this time of year they are weaning cubs onto solid food, and that chickens are easy prey for a wily predator.

I know all of these things, but when a fox attacks your poultry logic goes out the window. The response is, by and large, an emotional one. There’s anger and vitriol – tempered with disbelief, a twinge of regret and an underlying wave of guilt that you’ve failed to protect your hapless avian charges.

You take it as a personal affront, although of course it’s nothing of the sort.

Foxes are meant to be crepuscular – I know, I Googled it. But this fox, it seems, had failed to read its own press. I was ten minutes from home when the phone call came. A neighbour had called to the door to tell my wife he had just scared off a fox that was attacking a chicken by the side of the house. I rushed back to be greeted by distraught children and general scenes of mayhem. There were feathers and tears everywhere!

It was a telling reminder that nature doesn’t always play by our rules… an that when it comes to wildlife the widely accepted norm isn’t always an accurate guide.