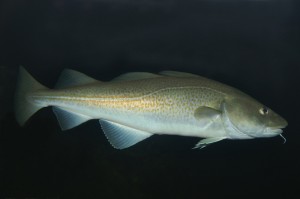 The once plentiful cod is becoming worryingly scarce throughout its north Atlantic range. For decades it has been the most sought after commercial fish species of European fishing fleets, and stocks are now in serious decline. Experts in the field of fisheries biology agree that crashes in cod populations caused by over-fishing mean that the species is now under serious threat.

Cod is a coldwater fish, with adults preferring water temperatures ranging from 2°C to 8°C, but they are sometimes found in water up to 20°C. Young cod have special enzymes in their blood that act as an anti-freeze and enable the young fish to survive even in sub-zero conditions. Although cod can be found at any depth from 1 to 600 metres (3 to 1,969 foot), their preferred depth range is between 10 and 200 metres (33 and 656 foot). Cod usually live close to the sea bottom and within their geographical range are generalists, occupying a wide range of habitats from rocky bottoms and gravel to mud and sand.

Cod are carnivorous and will eat a wide variety of species including bristle-worms, mussels, squids, crustaceans and fishes like sand eel, Norway pout, capelin, sticklebacks, sprat and herring. Adult cod are cannibalistic and will readily take smaller cod when the opportunity arises. The diet of cod is thought to affect their skin colour: those that feed on crustaceans tend to take on a brownish-golden hue, while those that feed primarily on other fish become more greenish-blue in appearance.

Tagging studies have shown that cod migrate substantial distances between their feeding and spawning grounds every year. These can be lengthy journeys, and tagged cod have been re-caught up to 500km (311 miles) from their point of origin. During these lengthy migrations large shoals of cod travel at depths of 300 to 400 metres (984 to 1,312 foot) using deep ocean currents to help them on their way.

Spawning takes place at specific sites around the continental shelf of northern Europe, always in locations where the prevailing surface current will carry the eggs in the direction of a suitable nursery ground. Each female cod can lay up to 500,000 tiny, transparent eggs per kg of her own body weight. An eight-year-old, 5kg female can therefore lay up to 2½ million eggs every year, and a record 9 million eggs were once found in a single 34kg female. These vast quantities of eggs are released directly into the plankton – a sort of oceanic soup of small plants and animals that exists in the surface layers of the ocean. After twelve days the eggs hatch into 4mm (0.15 inch) fry, which then stay in the plankton for a further ten weeks, increasing their body weight by around 40 times and growing to 2cm (c. 1 inch) long.

Almost all of the eggs and fry in the plankton are eaten long before they reach this size. The few that survive descend to the bottom, where they feed mainly on small bottom-dwelling crustaceans like small crabs. These small cod, or codling, grow quickly, reaching 8cm (3 inches) in the first six months and between 14cm and 18cm (5½ and 7 inches) by the end of their first year. Codling remain at the nursery grounds for 3 to 4 years until they mature, when they migrate to join the adult population.