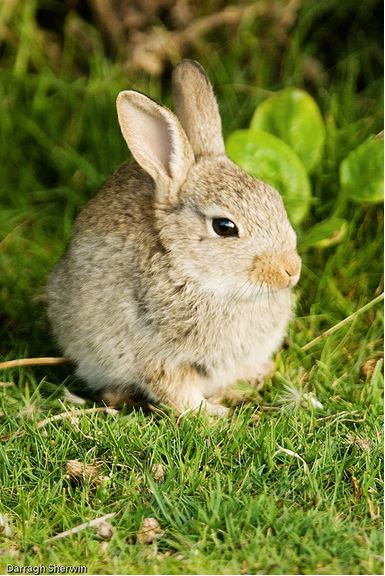 Originally from south-west Europe and north-west Africa, Rabbits were introduced into Ireland by the Normans way back in the 12th century AD. They were kept in enclosed warrens and were used as a source of sport for Norman noblemen as well as exploited as a source of both meat and fur. Naturally enough some of these rabbits escaped the confines of their warrens and with their fabled capacity for reproduction it wasn’t long before wild populations spread throughout the country.

Today the rabbit is one of our best known mammals. It is common practically everywhere, and rabbits are instantly recognisable with their hopping gait, long ears and endearing “bob” tail. People have always found rabbits endearing. They have captured the imaginations of children and adults alike, and have featured prominently in children’s stories and films over the years. They have also become popular as pets, and the host of domestic varieties available today are all ultimately descended from the wild European rabbit.

Adult rabbits are between 30 and 40 cm (12 to 16 inches) long and weigh between 1.2 and 2 Kg (2.5 and 4.5 lb). The fur is usually grey brown in colour, but can range from a sandy yellow to almost black in some individuals. The belly and the underside of the tail are white. Males (bucks) and females (does) are similar in appearance, but the males tend to be slightly heavier and have slightly broader heads.

Rabbits live in underground burrow systems known as warrens. Their Latin name cuniculus, means underground passage, and these highly adaptable mammals can be found wherever the ground is suitable for burrowing. They tend to prefer areas with loose, free draining soil with suitable above-ground cover like scrub or rocks. Favoured habitats include arable and pasture land close to hedgerows, sand dunes and deciduous woodland margins. They tend to avoid coniferous woodland and damp areas and are rarely found above the tree line.

Each warren will typically consist of a group ranging in size from a single pair to thirty or more animals. Burrowing duties are carried out exclusively by the females. Within the warren two distinct social hierarchies are at work: one for bucks and one for does. An individual’s place within their particular hierarchy is determined by bouts of play-fighting when young. Serious fighting occurs only rarely when rival bucks are competing over a receptive doe. 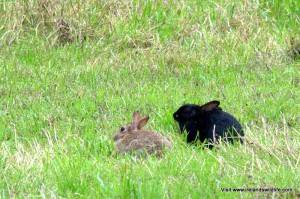 Rabbits reach sexual maturity at about 3½ to 4 months old. Breeding can occur year-round, but tends to take place mainly between the months of January and August. Mating is brief, but is repeated frequently while the doe is receptive. Gestation takes around 30 days, and a litter of 2-7 (average 6) blind, helpless kittens is normally born each month. Young rabbits are weaned at four weeks and leave the nursery burrow to take their place in the rabbit community.

Their rapid reproduction is offset by very high rates of natural mortality (upwards of 95%), particularly in young rabbits. They are a very important prey species for many of our predators, including foxes and stoats. Because they graze heavily on a wide range of young plants Rabbits can also be a serious agricultural pest, and their numbers have been controlled by shooting and trapping for generations. In the 1950’s however a much more controversial control measure was taken when the Myxoma virus was introduced into Irish rabbit populations. The disease decimated the species, almost wiping it out.

Today rabbit numbers have recovered in Ireland, due partly to increased resistance to the Myxoma virus. Populations are generally stable, but local fluctuations occur from year to year due to sporadic outbreaks of both myxomatosis and the more recent viral haemorrhagic disease (VHD).