You are here: Home / Wild Blog / Guest Post / Secrets of the Sycamore 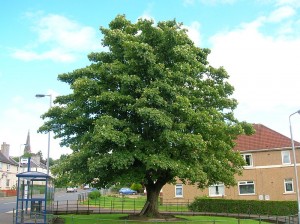 “So that’s what my breath looks like!” exclaimed my young daughter as we walked up to school on a cold and frosty morning. They had been busy breathing in deep lungfuls of the autumn air and watching excitedly as it escaped through their cupped hands. The novelty had long worn off for me and I encouraged them up the road with the promise of one more treat before their school day began.

The wind had been busy all night and had whipped up the leaves into large piles by the side of the road and along the base of the hedge. Cold weather is the best time for kicking leaves as they are crisp and firm. After a shower they become wet and sticky and are only good for the compost heap. Soon nature’s castles lay scattered along the path and we marched triumphantly to the school gate.

On my way home the wind had picked up slightly and something flying through the air caught my attention. At first I thought it was a moth but as it came closer I realised it was the winged seed of the sycamore tree or also known as a “helicopter”. It gets its unusual name from the way its twirls through the air rather like the wings of a real helicopter.

Sycamores are not native trees to Ireland (they were introduced around the sixteenth century) but have become naturalized throughout the country and I doubt there is a hedgerow or garden in the country that doesn’t contain at least one sycamore tree. The seeds can also reach unusual places and I have often found them in neglected gutters or growing precariously on old red brick chimney on the highest roofs. Their exact origins have been lost to antiquity due to waves of successive planting throughout Europe, where it was introduced as a shade tree for parks and large estates. It fulfils this role extremely well and mature specimens on good soil can grow to around 75 feet. Its branches stretch out the same distance casting long shadows over fields and lawns.

It is a member of the Maple family but I don’t think it has the dramatic autumn colours compared to other members of the group. Sycamores are widely planted as street trees as they can cope very well with the dirt and pollution of city living. If you examine the tree closely you will see that the bark is continuously “flaking”. This removes all the grime and soot and keeps the tree healthy. There is a lovely example of this in the centre of Nenagh town. An old Sycamore tree grows on the lawn in front of the court house and you can easily break off bits of the old bark. Rooks often choose to built their nests in sycamores as they afford excellent cover.

The timber is as strong as Oak but doesn’t last as long. It was once used for kitchen items because of its low resin content. Inventive kids held flying competitions with the winged seeds and used them in model making. Across the water in Wales it was made into love spoons and I presume these were given as a gift to newly married couples.

When I was in national school there was a large sycamore tree growing in a raised bed in the centre of the playground. Even though our nature table was often adorned with its leaves and branches I never really appreciated it till the autumn when hundred of helicopters filled the morning sky. School bags and pockets were often filled to bursting point as we enjoyed our interaction with nature. But one lazy September when I returned to school my tree was gone and with it came a subtle awareness that unwelcome change is going to be a permanent and necessary part of life.