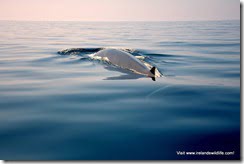 “This is a research charter, not a pleasure cruise,” cautioned Irish Whale and Dolphin Group (IWDG) sightings coordinator, Padraig Whooley as we boarded the boat. “We’re not stopping for anything under forty tonnes!”

As the Holly Jo slipped out of Reen Pier the anticipation on board was palpable. IWDG researchers were joined on board by a National Parks and Wildlife Service Ranger and eight IWDG members who’d managed to bag a place. I was lucky enough to be one of them. 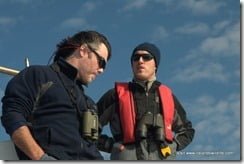 We were on the trail of fin whales (Balaenoptera physalus), the second largest animal ever to have lived on this planet, and annual visitors to inshore Irish waters. Fin whales had been reported just off the West Cork coastline the day before, and weather conditions couldn’t have been better. It promised to be an exciting day.

The Atlantic was almost eerily calm as skipper Colin Barnes picked up speed and we headed for a mark south of Galley Head where the fin whales had been seen the day before. I could feel my excitement mounting as I scanned the horizon. Looking around me I saw a dozen pairs of eyes, focussed and full of intent. We were all in the zone… that heady blend of heightened perception and anticipation that makes watching wildlife almost intoxicating. You’re on a high before you even see anything. 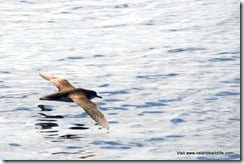 We didn’t have to wait too long before spotting our first marine mammal. A grey seal (Halichoerus grypus) popped up off the starboard bow, bobbing out of the water for a closer look at the boat. But seals weren’t the quarry for this expedition, and we soon left the curious onlooker behind.

Storm petrels danced on elegant wings close to the water’s surface, more than I’d seen in a long time, and then I spotted a chunkier, straighter-winged petrel with light markings on the upper wing and lacking the whitish bar on the under-wing. It was making uncharacteristically long glides – a Wilson’s storm petrel (and a life tick)! 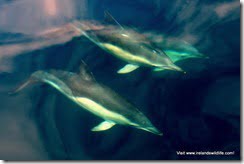 But seabirds weren’t what we were after either, and the Holly Joe motored on.

The first exception to the forty-tonne ultimatum came when a pod of common dolphins (Delphinus delphis) altered course to do a bit of bow-riding. While we didn’t exactly stop, we did slow to enjoy their antics for a while. They were our first cetaceans of the day, and as always, their grace, speed and sheer exuberance was inspirational to watch. After playing with the boat for a while the group set off again, and we continued our search for their larger cousins. 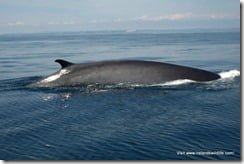 It took a while for us to spot the characteristic blow, gracefully arching back and almost ludicrously small dorsal fin of our first fin whale. Ironically the incredibly calm conditions made it harder to find these enormous animals. With less water splashing around the blowhole when the whales surfaced, the tall conical blows you usually associate with fin-whales were much less prevalent. After some searching we spotted a blow, and then another, and a third. We’d found them!

Encountering large whales is always an exhilarating and humbling experience, but seeing them in such calm water, with such exquisite light was a rare treat indeed. You could see the whales beneath the water as they rose to surface, and get a true sense of the sheer scale of these extraordinary animals. 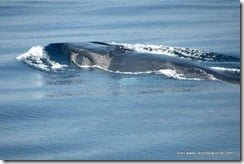 Fin whales are so big that you usually only see a small part of them on the surface – the top of the head, followed by the graceful arch of the back, and some time later the comparatively tiny dorsal fin. This day the  water was so clear that at one point, looking down from the roof of the Holly Joe, I could clearly see the whole whale – from the tip of its head to the impressive tail flukes. It was bigger than the boat by some margin: an awe inspiring sight.

We encountered at least ten fin whales during the rest of the day in groups of two to five animals. The IWDG secured hundreds of photo ID shots and biopsy samples from four new animals for genetic analysis to help them better understand these incredible animals, and ultimately assist them in their conservation.

We encountered four cetacean species during the day: common dolphin, harbour porpoise, fin whale and minke whale. We also came across several blue sharks languishing on the surface, and a sunfish to complete the tally. 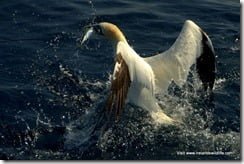 The trip wasn’t over yet though, and again birds figured prominently on the way home with shearwaters and storm petrels aplenty, and one of my favourites, the northern gannet, diving for fish.

As the boat pulled in at the pier again we were all weary but incredibly happy campers. The trip is one that will linger in memory for a lifetime, and now ranks as my second best whale-encounter worldwide (the best is still this whale watching trip from November 2004), and my top three have now been off West Cork – which is beating places like Kaikoura in New Zealand and Vancouver Island in Canada hands down.

A huge thank you to the IWDG for inviting members on this research-focussed expedition, and to Whale Watch with Colin Barnes for yet another incredible whale watching experience literally right on my doorstep.

See more photographs from the trip on our Ireland’s Wildlife Flickr stream.