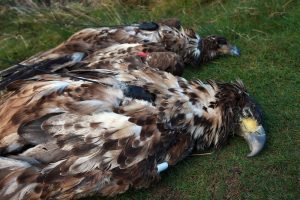 Reports today have confirmed that a white-tailed eagles found dead in Co. Cork in January was illegally poisoned.

The body of the female bird, released in Killarney National Park in 2010 as part of an official reintroduction project, was discovered washed up on the seashore at Glengariff in West Cork on the 18 January. Test results released today confirm the cause of death as poisoning.

A second eagle was found dead in Derrynane, South Kerry, earlier this week, and is also a suspected poisoning case. Tests are currently being carried out on the carcass to determine the exact cause of death.

These deaths bring the total number of white-tailed eagle bodies recovered in Ireland to 26, out of a total of 100 young Norwegian birds reintroduced to Co. Kerry between 2007 and 2011.  Almost half of those deaths (12 of the 26) have now been confirmed as illegal poisoning.

With the introduction phase of the project now over Dr Alan Mee, project manager of the white-tailed eagle reintroduction project with the Golden Eagle Trust, is appealing for vigilance to protect the remaining birds as they reach breeding age and start raising Irish born chicks to bolster the population.

Last year the first pair of white-tailed eagles to nest in Ireland for over a hundred years laid a clutch of eggs at a site in Co. Clare last year. That breeding attempt was ultimately unsuccessful, but Dr Mee has high hopes that 2013 will be a “breakthrough year” for the project, with six known pairs capable of breeding.

“This would be the start of what we hope will be the next and most critical phase of the reintroduction: establishing a small but viable breeding population,” he said. “As we are no longer releasing birds it is vital that we start producing our own chicks in the wild to replace any birds that are lost and maintain the population.”

Minister for Arts, Heritage and the Gaeltacht, Jimmy Deenihan has condemned the poisoning.

“The poisoning of an eagle in County Cork is very serious,” he said. “Eagles are protected by law, they are majestic birds of prey, and their reintroduction to Ireland is an important and very worthwhile project. My department is providing any assistance it can to the gardaí in the investigation of this matter.”