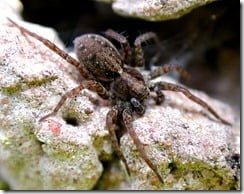 If there is one type of creature that instils completely unwarranted fear into large numbers of people here in Ireland it has to be spiders. Such fear is completely unfounded, as none of the spider species found in Ireland are capable of harming humans in any way. If anything spiders perform an invaluable service in keeping down the number of insect pests in and around our homes.

Pardosa amentata is a common species of spider belonging to the family Lycosidae. Early naturalists observed large numbers of these spiders scurrying across the ground together, and it was once thought that they hunted in packs… hence the name. Wolf spiders are in fact solitary hunters, but the name has stuck, and is applied to members of the family around the world to this day.

Instead of using a web to ensnare its prey like other spiders, the wolf spider uses stealth, speed and excellent eyesight to actively hunt living prey. Pardosa amentata is a mottled brown wolf spider between 5mm and 8mm (about ¼ inch) in length. Females are usually slightly larger than males, and lack the sooty-black hairs on the end of the pedipalps (small leg-like appendages either side of the mouth, often just called palps). This spider relies heavily on its eyesight to locate and stalk its prey. Its head is squared off at the sides, with two large eyes and four smaller ones facing forward, giving excellent frontal vision. Two further eyes situated on top of the head extend the range of vision to the sides and, to some extent, to the rear. With this impressive optical array the spider is well equipped to spot its prey at some distance.

The wolf spider takes full advantage of its visual acuity by hunting in full daylight, and it can often be seen on bright sunny days scurrying around in the open or over low vegetation looking for insects. When it spots a likely meal, the wolf spider creeps towards it, and then attacks with a sudden burst of speed, leaping on the victim and piercing it with its fangs.

The smaller male has to take particular care approaching a potential mate if it wants to avoid the same fate. He stops abruptly some 3 to 4 centimetres (1½ inches) away from the female, giving himself plenty of room for evasive action. He then raises himself high on his hind legs and, relying on the female’s acute vision, stretches his palps out and waves them in a kind of elaborate spider-semaphore, gradually moving closer. If the female rejects his advances she will lunge forward and the smaller, more agile male will dart away only to return a few seconds later to start his display again.

Female wolf spiders make excellent mothers, and exhibit a surprising amount of parental care. Eggs are laid in a protective egg sac that the female carries around under her abdomen attached to her spinnerets. Because the egg sac is carried behind her the female is still free to hunt and feed relatively unencumbered by her burden.

When she senses the eggs hatching the female rips open the egg sac and the baby spiders climb onto her back, and it’s not uncommon to see female wolf spiders scurrying across the garden with a mass of babies on board. If a baby falls off it simply runs back along its silken lifeline, which is always attached to the mother, and climbs aboard again. Babies stay with their mother until their second moult, at which point they leave to pursue an independent existence.