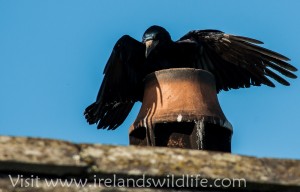 I was hanging out washing yesterday lunchtime when I noticed this rook eyeing up the chimney.

We’ve just lit the wood-burner in the kitchen, and while there was no visible smoke coming out of the chimney, I’m pretty certain there was a steady stream of hot air flowing from it.

The rook, which looked wet… as if it had just had a bath (which they tend to do in a nearby water trough)… flew onto the lip of the chimney and started to bathe in the stream of hot air.

Now, I know the bird is bathing in the invisible “smoke” to rid itself of parasites, but it looks for all the world as if it was “blow-drying” its feathers.