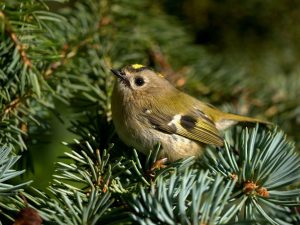 The diminutive goldcrest is not only Ireland’s smallest bird, but also Europe’s – a title it shares with its close relative the firecrest. It is widespread and found throughout the country, and often visits gardens, especially during winter months. Despite it’s restless, flitting behaviour and distinctive markings this bird’s tiny size makes it easy to overlook.

Goldcrests are attractive little birds, with dull olive green plumage above, buff-white below and black and white markings on their olive-green wings. Their most distinctive feature, however, is the flaming yellow (female) or yellow and orange (male) black-bordered strip on the crown that gives the species its name. Pale markings around the eyes give the bird an open-faced, almost staring expression when viewed up close.

Often the easiest way to detect the presence of goldcrests is by their high-pitched call – a thin, insistent “tsee, tsee, tsee”, although this is so high-pitched that it can be beyond the range of some people’s hearing. They are restless little birds, and their incessant flitting as they forage high in the foliage can also betray their presence.

Predominantly birds of conifer woodland, goldcrests favour stands of spruce and silver fir, and less so larch and Scots pine. However they can be found in trees or large shrubs of any kind as long as there are conifer trees in the vicinity. In winter, when food is scarce, they are more likely to be seen in parks, gardens and areas of broadleaf woodland as they broaden their foraging efforts.

These tiny birds are acrobatic, tit-like feeders, often hanging upside down as they systematically inspect the underside of leaves and pine needles for insects, insect larvae and spiders.

In early spring the males display to females, raising and fanning their impressive flame and gold crests while drooping their wings and puffing out their body plumage. It’s an impressive show for so small a bird.

Once paired the birds build a deep hammock-like nest out of moss and spiders webs, lined with feathers and usually suspended near the tips of conifer branches. The elaborate structure can take up to a fortnight to build. The female lays 7-10 tiny white eggs with brown speckles in the nest from April to May and incubation takes 14 to 17 days. Young fledge two to three weeks after hatching and goldcrests typically rear two broods of young in a season. In some woodlands goldcrests may be so common that they occupy vertically tiered territories above each other in the conifer canopy.

Goldcrests are resident in Ireland all year round, and there are an estimated 300,000 breeding pairs here, with a further 600,000 in Britain. These resident birds’ numbers are swelled in autumn and winter by the arrival of migrant birds from northern Europe.

Although common and widespread, goldcrest populations have declined recently and it is listed as an “amber” species of moderate conservations concern. These tiny birds are hit particularly hard by harsh winters, which can cause numbers to plummet alarmingly. However, populations do tend to bounce back relatively quickly.

Some rights reserved by Frank.Vassen