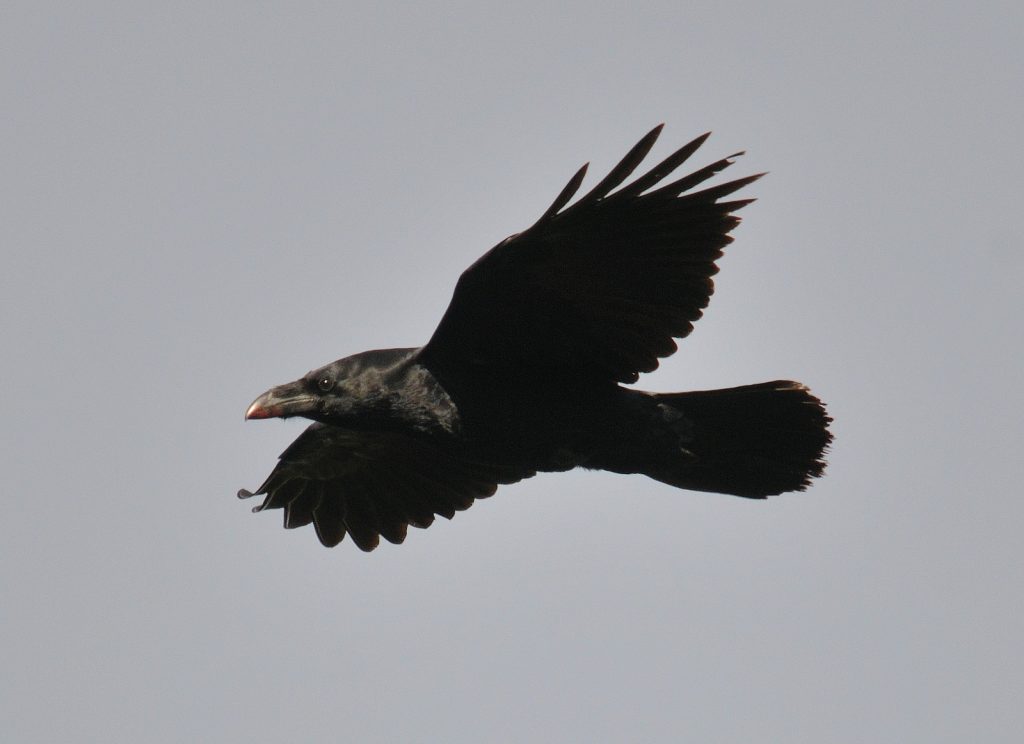 Seen close up the raven is a truly magnificent bird. The largest member of the crow family, it is the biggest passerine (perching) bird in Europe, and occurs all over Ireland.

Size is the raven’s most distinguishing feature. At 54 to 68 cm long, with a wingspan doubling that, it dwarfs any other black bird found in Ireland. Its glossy plumage is entirely black. It has long wings, a long, diamond-shaped tail and a long head that gives it a very distinctive cross-like silhouette in flight. Even at a distance, when its large size is sometimes less obvious, the raven is still a distinctive bird with its heavy stature, strong bill and prominent throat ruff.

Male and female ravens are similar in appearance, although the female tends to be slightly smaller than the male. Juveniles look like the adult birds, but have duller plumage that may show varying amounts of brown.

Ravens are famous for their intelligence, and, like other crows, are capable of finding innovative solutions to newly encountered problems. They are also playful birds, and sometimes engage in aerial acrobatics and game playing, apparently just for the fun of it. They feed on a wide range of food, including carrion, small mammals, reptiles, amphibians, insects and refuse – although carrion tends to be the most important element in their diet.

Globally the raven is a very widely distributed bird, and has the largest range of any member of the crow family. The species thrives in a variety of climatic conditions and is found from well within the Arctic circle to the deserts of North Africa, across central Asia to the islands of the Pacific and through north and central America as far south as Nicaragua.

Although in some areas of their range ravens have become habituated to humans, and set up home close to human settlements, here in Ireland the birds tend to prefer wide open spaces without too much tree cover. Bogs, craggy coastlines, mountains and areas of upland moor or scrub land are all prime raven territory.

Juvenile ravens start courting early in life, but it may take up to three years for them to find a suitable mate and establish a breeding territory. They are fiercely territorial birds, and defend their borders vigorously. The resident pair will chase an intruder for several kilometres, even resorting to aerial bombardment and fighting to drive it away.

The raven’s nest consists of a cup of large twigs lined with softer material like wool, fur or grass. It is typically built in the top of an isolated tree or on an inaccessible cliff face. Four to six pale blue-green eggs with brown spots are laid between February and May and the female incubates them for 20 to 25 days, with the male bringing food to her on the nest. Once the young hatch both parents care for them for five to six weeks until they finally fledge.

Ravens have strong connections with European folklore and mythology – particularly in Celtic and Norse mythology. Ravens were the messengers of the Irish and Welsh gods, and were associated with battle and prophecy. In Norse mythology two ravens, Hugin and Munin (thought and memory), are associated with the god Odin. The birds were sent out into the world at dawn to gather information at Odin’s behest, and would return at dusk to perch on his shoulders and whisper their news into the god’s ears.