You are here: Home / Featured / Mass stranding of dead dolphins in Mayo 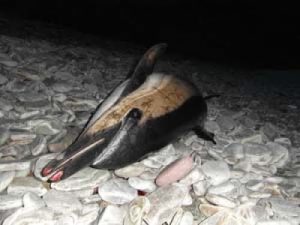 A report from the Irish Whale and Dolphin Group has confirmed that eight (8) dead common dolphins Delphinus delphis have been discovered washed up on the beaches of Achill Island, Co. Mayo over recent days, with unconfirmed reports of at least another one dolphin on a nearby island.

“The IWDG don’t have full details to hand as yet but photos sent to us by local people show most of the dolphins died very recently,” said IWDG Stranding Coordinator, Mick O’Connel, on the organisation’s website.

To date dead dolphins have been confirmed on Keel Beach, Keem Beach and Dookinella.

While the occasional mass stranding of live dolphins does occur, the IWDG stressed that it is extremely unusual for so many dead dolphins to wash ashore in such close proximity to each other in Ireland.

The group is monitoring the situation and will post updates to its website as more news becomes available.